It seems Russsian President, Vladimir Putin, and America's President Donald Trump, are not best friends anymore, as they've now resorted to issuing threats to each other.

The fallout comes after President Trump in the early hours of Friday morning,  ordered airstrikes (pictured) on a Syrian airbase in the first direct attack by the US against Assad. 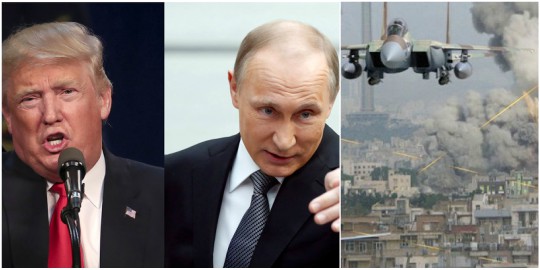 the rebel-held town of Khan Sheikhun in northern Syria which killed 87 civilians, including many children.

A joint command centre of Russia, Iran and Islamist militant group Hezbollah warned America they would not allow further attacks on the Syrian regime.

In a statement they said: ‘What America waged in an aggression on Syria is a crossing of red lines. From now on we will respond with force to any aggressor or any breach of red lines from whoever it is and America knows our ability to respond well.’The Russian Embassy in London suggested, on Sunday night, that there could be ‘real war’ if Moscow is presented with an ultimatum over Syria. But UK Foreign Secretary Boris Johnson will lead a push on Monday for Russia to face tough new sanctions unless it withdraws its support for Assad.

Russian President Vladimir Putin met with President of the Islamic Republic of Iran Hassan Rouhani in Moscow on March 28 .

DailySunreports that in a series of provocative tweets on its official account, the Russian embassy suggested that if Russia were given an ultimatum, the outcome would be either, ‘war of clowns, war of muses, a conventional war or a mix of the above’.

The Russian Embassy in London responded with anger to claims the G7 could agree to slap Putin (shown) with the threat of sanctions.

It added: ‘If G7 ultimatum to Russia brings us to real war, what is your trust in @realDonaldTrump as a wartime leader & @BorisJohnson as his lieutenant?’ Iran’s supreme leader, Ayatollah Ali Khamenei, last night said the US had made a ‘strategic mistake’ by attacking Syria.

He made clear he was not intimidated by claims the airstrike was a warning that America was willing to target other countries. Tehran has been a key backer of Assad in Syria’s six-year civil war.

‘The Islamic Republic of Iran will not leave the field in the face of threats. Former American officials created Daesh [Islamic State] and the current leaders are reinforcing it,’ Khamenei said.

Trump administration officials yesterday blamed Russian inaction for enabling the deadly poison gas attack against Syrian civilians last week. US Secretary of State Rex Tillerson said Syria was able to execute the attack, which killed scores of people, because Moscow had failed to carry out a 2013 agreement to secure and destroy chemical weapons in the country.