A group of Nigerians on board a Dutch KLM flight stopped the flight from departing, demanding that a fellow Nigerian who was handcuffed as well as chained like a hardened criminal, scheduled for deportation back to Nigeria be removed from the flight.

Those Nigerians on board the flight were unhappy how the deportee was handcuffed and chained on his legs as if he was a hardcore and violent criminal for mere lack of proper documentation in the country. 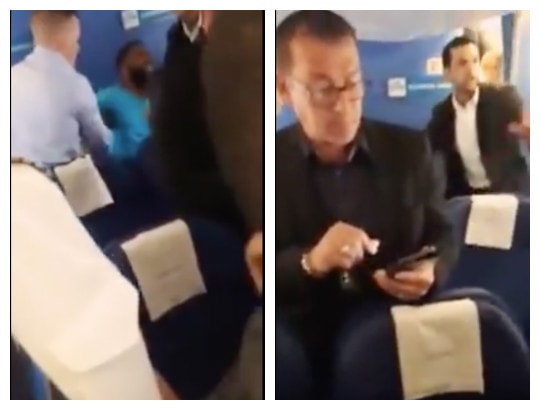 So, that drew their wrath and they started to agitate for the handcuffs and chains to his legs be removed and the deportation suspended or he removed from the flight.

News, they threatened to release it on-line in order to expose the manner Nigerians and other Africans are being treated by some European countries during deportation of those they consider as illegal immigrants or failed asylum seekers.

The groups of Nigerians on board the flight pressurised the group of five security officers whose job is to deport a single person, to leave the flight or else the flight will remain on the ground.

After a long altercation, the Nigerian, who was to be deported was removed from the flight and the security officers left the flight too. He lifted his hands to reveal his handcuffs and from the manner he was walking, It is apparent that he was chained on his legs too.

This habit is very rampant and the  manner African deportees from around European Union. And it is a classical example to demonstrate condition these deportees are subjected to by the security officers during the deportation process.

Some years back a female Nigerian deportee who was being deported by Belgian security officers was asphyxiated and her death was a big news too.

There has been several cases of death during deportation by European security agents. We hope no harm would befall this specific man in this case.