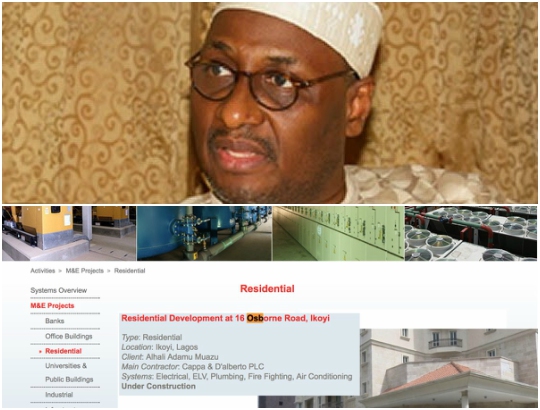 Mr. Muazu reached out to Saharareporters shortly after they published the report, but however, failed to explain why the construction firm that built the house listed his name as a client.

Etco Nigeria Limited, a construction firm partly owned by an Israeli company, Electral Limited, prides itself as haven built several residential and corporate complexes in Abuja, Port Harcourt, and Lagos including the property at No 16 Osborne Towers, Ikoyi, Lagos, where EFCC recovered over $50 million cash stashed away in fire-resistant cabinets behind a false wall on Wednesday afternoon.

The company on their website listed  Mu'azu as owner of the house. 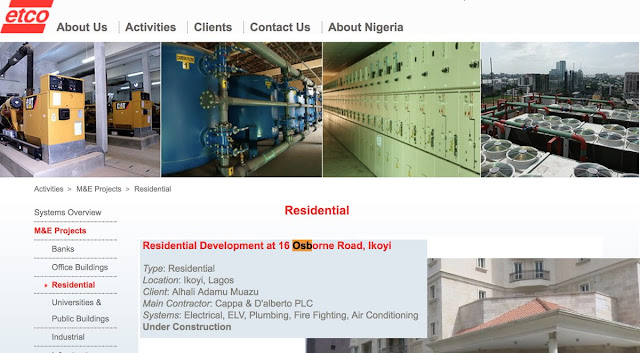 According to Sahara Reporters, at about 9:00pm Eastern Standard Time in the US, one Akin Oyegoke who identified himself as the "Media and ICT Personal Assistant" to Mr. Mu’azu called SaharaReporters from London to deny that the former PDP chair owns the building.

“Mr Muazu does not own any house in Ikoyi except his house at Walter Carrington street, Victoria Island Lagos,” Oyegoke said.

He also denied that his boss ever lived in the apartment where Saharareporters noted he maintains a Penthouse.

Mr.Oyegoke claimed his boss was unhappy about the story published by SaharaReporters linking the building to Muazu and requested that it should be removed, but when the website asked him to explain why the construction company listed his boss’s name as the client on the property profile, he offered no answer only promising to reach out to Mr. Muazu and get back to us but never did as at the time of publishing this story.

Meanwhile, sources close the ex-PDP chair have confirmed that he is indeed the owner of the property.

Mu’azu was the former governor of Bauchi between 1999 and 2007. A graduate of Ahmadu Bello University, he received Bachelor of Science degree in Quantity Surveying and masters’ degree in Construction Management.

He served as property manager of the Bauchi State Investment and Property Development Company. He ran for the senate seat in the 2007 but was defeated, but was later elected as chairman of his party, the PDP in 2014 before fleeing Nigeria in 2015 after the party's candidate, Goodluck Jonathan was defeated in a Presidential Election that brought the opposition All Progressives Congress party to power.

Mr. Muaza had previously been declared wanted by the EFCC for engaging in massive corruption. He is believed to be living between the Uk and Malaysia aided by a luxurious private jet he purchased after 2015 election in Nigeria.