The court documents obtained by Vanity Fair, reveals that Pompliano’s legal team said he was in a meeting with Spiegel to discuss growth in India and Spain, when the Snapchat CEO said he did not want to expand into these “poor” countries. 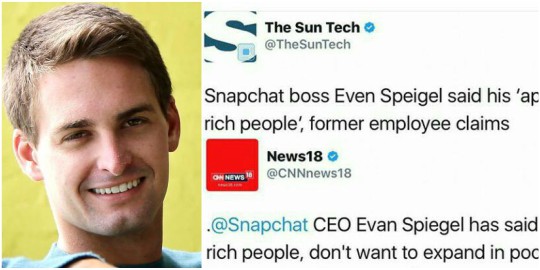 They wrote: “When Mr. Pompliano attempted to explain that he could implement strategies to achieve significant growth for Snapchat in these major markets, Mr Spiegel abruptly cut in and said: “This app is only for rich people. I don’t want to expand into into poor countries like India and Spain.”

However, his case against Snapchat is, they “made false representations concerning the circumstances” around his departure.

On the other hand, Snapchat’s legal team described Pompliano as a “disgruntled employee fired for poor performance”. But Pompliano said he was given the boot after uncovering “wide-spread, systemic failure” in the way Snapchat measures data about its users.