The Imo State police have reportedly arrested the mastermind of the Owerri bank robbery which led to the killing of a bank customer in the state.

You recall a four-man armed robbery gang on Wednesday, February, 22, stormed a Bank along Wetheral road Owerri, Imo state capital, and carried out an attack that left one dead and several injured.

The robbers, who had trailed a customer with a huge sum of money to the bank, on getting to the bank premises opened fire at the man as he was bringing out his money. As soon as that happened, security men at the bank responded by shooting down one of the robbers.

The robbers later fled with their heist in a Ghana-must-go bag. 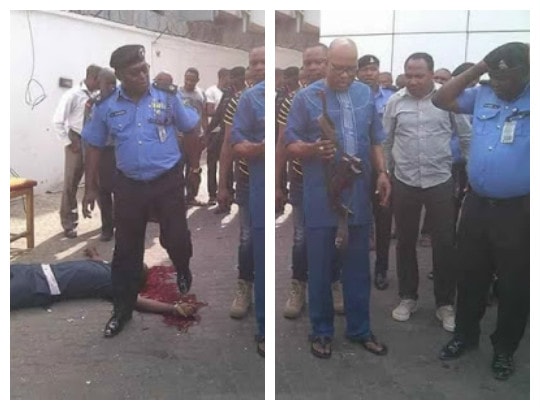 After six weeks of investigation, two suspects– Justice Ogbenna, aka JJ, and Okechukwu Onwuamaegbu– were on Friday arrested in Aba, Abia State by operatives of the Imo State Police

Punch reports the state Police Public Relations Officer, Andrew Enwerem, told their correspondent on Sunday that policemen attached to the Special Anti-robbery Squad of the command arrested the suspected robbers at the Saint Francis Mortuary in Osisioma Aba, Abia State.

Enwerem disclosed that the suspects led the men and officers of the command to their hideout at Umuejea Nvosi in the Isiala Ngwa South Local Government Area of Abia State where two AK 47 rifles, seven magazines, and 175 live ammunition were recovered.

“The two prime suspects who coordinated the Bank robbery in Owerri on February 23, have been arrested.“We trailed them to Aba, where they were nabbed. They immediately led our men to their hideout at Umuejea Nvosi in the Isiala Ngwa South LGA, where exhibits like two AK-47 rifles, seven magazines, and 127 live ammunition were recovered.”Enwerem confirmed that the suspects, who were cooling their heels at the state police command in Owerri, had made useful statements and were helping the police with information that could help in the arrest  of other fleeing members of the gang.

He disclosed that the police would charge them to court at the end of investigations.

A top police source told Punch that the leader of the gang, Ogbenna, was arrested on the day he planned to bury his late father. He said,

“We got information that he would bury his father on Friday and we trailed him to the mortuary. We laid siege to the morgue. Immediately he arrived with his family members and friends to carry the remains of his father home, we arrested him.”The police source, who described the suspect as a notorious armed robber, claimed that he had jumped bail in Anambra State in 2016 in a similar case of armed robbery.