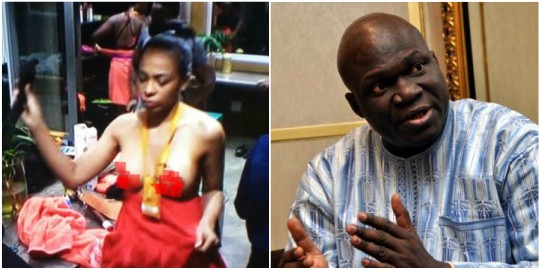 Here's what Reuben wrote about her in his article;

"Lesson three: humility pays. At the end of the day, in the last week of the program, the decision by the viewing public was a moral, sentimental one. The biggest star

of the program was, I don’t know what you think, Tboss (real name: Tokunbo Idowu), half Nigerian, half-Romanian. She dominated the space with her Jezebelic antics, even got some of the male participants ousted by entrapping and outsmarting them with her wiles.

She projected herself as a s*x object, the ultimate manipulator, the champion Delilah of the Big Brother Africa series. She even made a joke of the entire Big Brother concept by saying she didn’t need the money and if she won, she would spend it in two weeks to pay off debts, and in any case, she had men hitting on her, offering to take her on a ride in their private jets.

She played the role of a female barracuda. Given her looks and talents, she would have been a perfect winner. She would have looked good on the billboards. But she lost because of her arrogance. Attitude is everything: this is the lesson of Tboss’ disgrace and humiliation. When she was sent out of the House as the second runner-up, the viewing center in Ikeja, Lagos, including Kemen whose nemesis she was, danced in joy. “They are taunting me?” she asked Ebuka, the anchor. No, sweetheart, they were making a far more serious statement about you.

I have seen better breasts Tboss. I am not too sure those private jet owners will be excited by your fluffy, South-looking, slightly bigger than mangoes breasts. If the same men see bigger assets, I mean, those interesting Ojiakor-like ones that look like papayas, pineapples and watermelons, they will not send private jets, they will deploy submarines and fighter jets!"

In TBoss interview with the Nation, she said;

“I do not feel I’m an arrogant person. I’m sorry he has that opinion of me. I read the comments.

“My people actually were afraid that I would get emotional and sad about it. But I’m not. I was actually quite amused when I read his comments about the ‘mango’ part. It was actually quite comical.”TBoss also defended her decision to walk around half-clad, revealing that it’s an act she’s become accustomed to. Here's what she said;

“See, the Big Brother house is a place where you showcase yourself. You’re free to be T-Boss. Whoever T-Boss is, you show the world who T-Boss is.

“And in my own life, in my normal day-to-day life, I don’t like to wear clothes when I’m walking around in my house. I like to be free, here (pointing from her waist downwards), covered here (pointing upwards from her waist), what’s the point? Or I’ll just wear one small blouse. The Big Brother house was like my house at a point.

“I was just being myself and walking around without clothes… I didn’t go to the kitchen, you know, because, then, that is like really seeking attention or go out into the garden or to the arena. No, I didn’t do that.”