The Nigeria Police Force, has placed a N10M bounty on the head of a notorious killer, Terwase Akwaza aka Ghana, for reportedly killing more than 17 people in Zaki Ibiam area of Benue State, and another 50 in a different location, destroying goods worth millions of Naira. 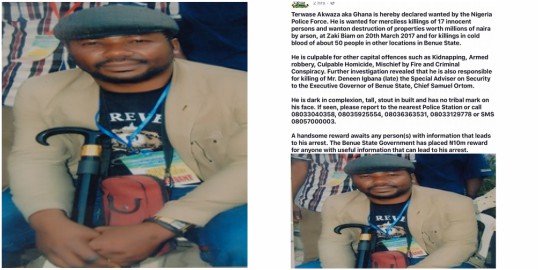 ISSUED BY THE AUTHORITY OF THE INSPECTOR GENERAL OF POLICE

WANTED BY THE NIGERIA POLICE FORCE

The above named person is hereby declared wanted by the Nigeria Police Force. A warrant of arrest has been duly obtained from Court of competent jurisdiction for his arrest.

2. The said Terwase Akwaza aka Ghana is wanted for merciless killings of seventeen (17) innocent persons and wanton destruction of properties worth millions of naira by arson, at Zaki Biam on 20th March 2017 and for killings in cold blood of about fifty (50) people in other locations in Benue State. He is culpable for other capital offences such as Kidnapping, Armed robbery, Culpable Homicide, Mischief by Fire and Criminal Conspiracy. Further investigation revealed that he is also responsible for killing of Mr. Deneen Igbana (late) the Special Adviser on Security to the Executive Governor of Benue State, Chief Samuel Ortom.

3. He is dark in complexion, tall, stout in built and has no tribal mark on his face.

4. Terwase Akwaza aka Ghana is a dangerous suspect, and an indigene of Gbise in Katsina-Ala LGA of Benue State. He speaks Tiv, Idoma and Pigin English Languages fluently.