A 37-year-old mother in Kabimbiri village, Mukono District in Uganda has given birth to 38 children. Villagers have given the mother, Mariam Nabatanzi Babirye, the nickname of Nalongo Muzaala Bana, which means “the twin mother who produces quadruplets.”

In what must be some sort of record, Mariam has six sets of twins, four sets of triplets, three sets of quadruplets and two single births. 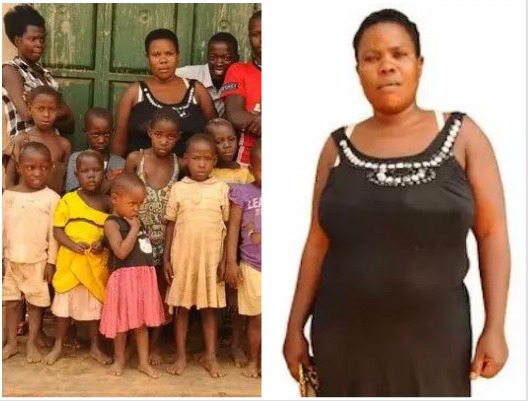 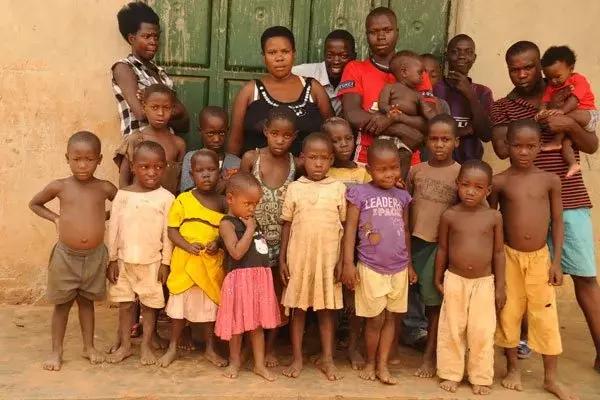 Mariam (in black dress) and some of her 38 childrenIn a recent interview with a Ugandan daily, she said: “My father gave birth to 45 children with different women and [they] all came in quintuplets, quadruplets, twins and triplets.”

Mariam says her father had 45 children, many of whom came in quintuplets, quadruplets and twins.

Dr Charles Kiggundu, a gynecologist at Mulago Hospital confirms that Mariam may have taken after her father, as her case may be genetic.

He said: “Her case is genetic predisposition to hyper-ovulate (releasing multiple eggs in one cycle), which significantly increases the chance of having multiples.”

Mariam said she was married off at an early age and she gave birth for the first time at the age of 13 to twins.

She said she sought medical advice several times in a bid to stop having children but doctors advised her that since she produces so many eggs, it would be dangerous to her health.

However, Dr Kiggundu said Mariam was not well advised, because doctors could easily have performed tubal ligation as a permanent method of contraception.

Moreover, Mariam has a non-supportive husband who is rarely there for her and her children. Her eldest son, Charles Musisi, 23, confirmed: “Our siblings do not know what father looks like. I last saw him when I was 13 years old and only briefly at night because he rushed off again.”

As a parting shot, Mariam advised parents to never sell their children off to early marriage and men to look after their wives and children