Choi! Piers Morgan Finished The Kardashians In This Article 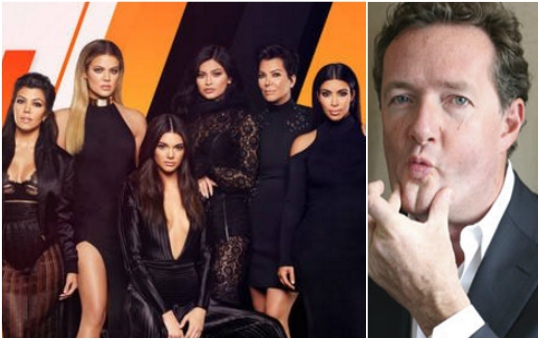 He says the week Kim hit rock bottom finally made him realize he no longer wish to keep up with her or any of the "greedy, cynical" Kardashian clan. Read below...

And her ghastly family.

I just can’t stomach the sight or thought of any of these talentless, publicity-crazed, unctuously self-absorbed, vacuous wastrels for a single moment longer.

Not Kim, not Kendall, not Kylie, not Kourtney, not Kris, not Caitlyn – not ANY of them.

This feeling of utter, skin-crawling anathema towards all things Kardashian and Jenner has been creeping up inside my intestines for a while but it crystallised itself today in a blazing eruption of irritation and contempt.

In the words of Peter Finch’s news anchor character Howard Beale in the movie Network: ‘I’m as mad as hell and I’m not going to take this anymore!’

What tipped me over the edge? Kim’s pathetic new interview with Ellen DeGeneres, the world’s most simpering chat show host and chief celebrity sycophant.

Here was a true meeting of galactic level insincerity.

It was Kim’s first TV appearance since she was robbed at gunpoint in Paris last year, and she milked it like an over-eager farmhand in a field full of udder-bloated cows.

The tears rolled as Kim told an equally choked up Ellen: ‘I know it sounds crazy but I know this was meant to happen to me. I feel like I am such a different person. I feel like things happen in life to teach you things.’

Ellen handed over some tissues, her caring, sharing face belying what she was really thinking, which was ‘KERCHING! You keep crying baby, this is ratings gold!’

Kim announced she no longer wears jewellery, or posts photos of her cars, because she doesn’t want to draw attention to her wealth.

‘I was definitely materialistic before,’ she explained, in between her wailing sobs. ‘I’m so glad that my kids get this me, that this is who is raising my kids. I just don’t care about that stuff any more. I really don’t.’

For a second, I nearly believed her.

It would take a heart of stone not to see a mother weep as she talked about such a terrible experience and how it had reshaped her entire life.

But then I remembered it was Kim Kardashian we’re dealing with, so I went to her Twitter account to check how her new life of anti-materialism was going.

Her most recent three tweets all direct her 51 million followers to her ‘Kimoji’ merchandise website.

That’s a cartoon image of her large naked bottom inside an ashtray.

Among other items for purchase is her Butt Pool Float at $98 that also features Kim’s naked bottom shaped like a swimming pool float.

Ms Kardashian is very proud of her bottom.

So much so that she’s spent the past week deliberately flaunting it for the paparazzi on a beach holiday with her female friends.

It’s been a deliberate marketing ploy to sell her bottom-related merchandise.

The only problem is that the real thing, as we have now seen, bares no relation to the perfectly proportioned, super-smooth, cellulite-free vision of glory she sells to the world via her Kimoji wares or the heavily-airbrushed photos she posts and flogs to magazines.

In other words, as with all things Kardashian these days, it’s one gigantic con trick. A façade aided and abetted by the world’s women’s magazine industry that wants us all to buy into the fakery and compel its readers to aspire to completely bogus body images with myriad expensive potions, creams and surgeries.

Other Kimoji merchandise includes hats and T-shirts with pro-drugs message like ‘Never Not High’ and ‘Lit Tie Dye rolling paper’.

Oh, and a peach heart emoji that says ‘PNP’. That’s a slang term used mainly by gay men on sex apps like Grindr to denote ‘Party’n’Play’. It means they are interested in having high-risk, often unprotected sex with strangers while taking drugs like methamphetamine and GHB.

On the hit reality show Keeping Up With The Kardashians, Kim is always careful to maintain an abstemious image – no drugs and very little alcohol.

But it would seem that once she’s hooked her young fans into THAT image of nice, decent purity, she then urges them on her social media sites to spend big money on stuff actively promoting a very different lifestyle.

For a while, I enjoyed the Kardashian ride; I interviewed Kim and her sister Kourtney for CNN in 2011 and they seemed nice girls who worked hard and were doing no real harm to anyone. Their overly pious critics seemed to miss the point - which was that there wasn’t really any point to them. They were just having fun.

As a result, I’d defend them vigorously against those who said they represented everything repellent about the fickle, artless world of Z-list reality television.

Then it all started to turn a bit darker and my sympathies went south too.

Nice girl Kim married bad boy rapper Kanye West and began posting profanely captioned nude photos of herself flipping the bird. By doing so, she crossed a line from harmless fun to something altogether more crass and unpleasant.

Particularly when she claimed it was being done as part of some kind of stand for ‘feminism and liberating empowerment for women’.

I’m not a prude and I couldn’t care less what people like Kim Kardashian want to expose of themselves in private, if they do so legally.

But when you have literally tens of millions of young female followers hanging on your every social media post, you surely have a great duty of care to send them the right messages?

For the world’s young girls to think the only way to get on in life as a woman is to strip naked in public and flip the bird is not just wrong, it’s dangerous.

Nor should they be encouraged to spend large amounts of money on accessories promoting the joy of drugs, when so many of them are still at school.

Kim Kardashian wants us to think she’s turned over a new leaf, that she’s renounced her old materialistic ways. That, as a mother of two young children herself, she has learned how to behave in a responsible fashion.

The truth is that she’s now using her massive global platform to actively corrupt our kids.

And she doesn’t hesitate to aggressively exploit her own children as often as possible to further promote her brand through sites like Instagram, whilst pretending to prioritise their safety and interests.

The rest of her family have all followed suit, willingly, greedily complicit in the same ruthlessly commercial game.

I don’t find the Kardashian machine funny or harmless any more.

Kim Kardashian’s now selling nudity, drugs, booze and high-risk sex to the youth of the world and making hundreds of millions of dollars in the process.

Do we really want someone like her to be the role model our young daughters look up to and want to emulate?

No, as I said at the start of this column, I’m done with Kim Kardashian and her ghastly family.

I want them gone from public life, expunged from the airwaves, thrown off the newsstands, and extinguished from the celebrity ether.

They’ve become a pitiful parody of stinking, sobbing hypocrisy that should no longer be encouraged or tolerated in civilised society.

It’s time to boot Kim Kardashian and her gigantic, surgically enhanced backside into the same obscurity from which she once crawled thanks to that infamous sex tape.

And I want you to join me in this campaign.

Again, back to the gloriously relevant words of Howard Beale:

‘You gotta say, “I’m a human being, goddammit! My life has value!” So get up out of your chairs, go to the window, open it, stick your head out and yell: “I’M AS MAD AS HELL, AND I’M NOT GOING TO TAKE THIS ANYMORE!”

I no longer want to keep up with the Kardashians.