The Nigeria Police Force has arraigned a self-acclaimed whistleblower, Dennis Ukpabi, and a Forumger, Fejiro Oliver, for cyber stalking.

It was learnt that Ukpabi, who is a former employee of Sterling Bank Plc, was arrested for publishing a book titled, ‘The Whistleblower’, in which he accused some employees of the bank – Adekanla Desalu, Eguru Nyenke, Janet Akpan and Kojusola Ajao – of fraud. 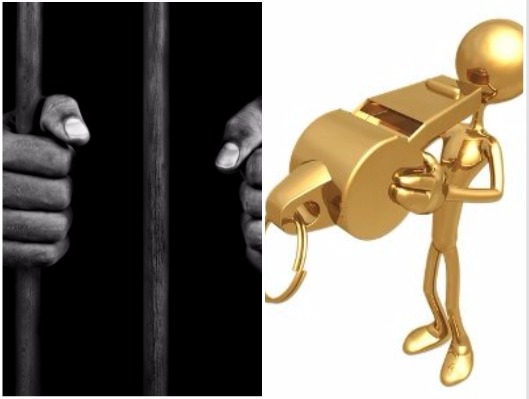 Ukpabi also alleged that after exposing the fraud in the bank, one of his colleagues involved in the fraud was promoted because she was dating an executive director at the bank.

Ukpabi and Oliver were arraigned before a Federal High Court in Lagos on Friday on five charges bordering on alleged acts of ‘cyber stalking’, which are said to be punishable under the provisions of Section 24 of the Cybercrimes (Prohibition and Prevention etc) Act, 2015.

The first charge read, “That you Dennis Ukpabi and Tega Oghenero between 1st – 13th February, 2017 in Lagos within the jurisdiction of Federal High Court, conspired together to commit felonies, namely, knowingly and intentionally sending intimidated, hatred, insulting and needless anxiety messages and thereby committing an offence punishable under section 27 (1) (b) of Cybercrime (prohibition, prevention etc Act 2015).”

Another charge read that the accused sent offensive messages to Desalu, Busola Awosile, Nyenke and Adeyemi Odubiyi, which are said to be ‘’punishable under section 24 (1) (b) of Cybercrime (prohibition, prevention etc Act 2015.’’

The defendants pleaded not guilty to the charges.

The prosecution counsel, who is also a Superintendent of Police, Mr. J. Oloruntoba, asked the court to remand the defendants in prison custody. Frantic efforts were made by lawyers representing the two defendants; Mrs. Kitan and Mr. Inibehe Effiong, to persuade the court to admit them to bail.

Effiong, who is a human rights lawyer, informed the court that the defendants were accosted by the police and arraigned surreptitiously without proper and adequate notice.

The trial judge, Justice Mohammed Idris, asked the defendants’ counsel to bring a formal application for bail and promised to hear it expeditiously.

The judge remanded them in Ikoyi Prisons..Crdts: PunchNg