Hilarious: Nigerian Musicians And Kind Of Students They Would Have Been


A Facebook user made/shared a hilarious list of the kinds of students some of our A-lists Nigerian musicians would have been. Though it seems like its a stale stuff but then...

'Okay now, let’s take a look at some of our musicians in the music industry and judge, with their ways of life, the kind of students they would have made in school.' 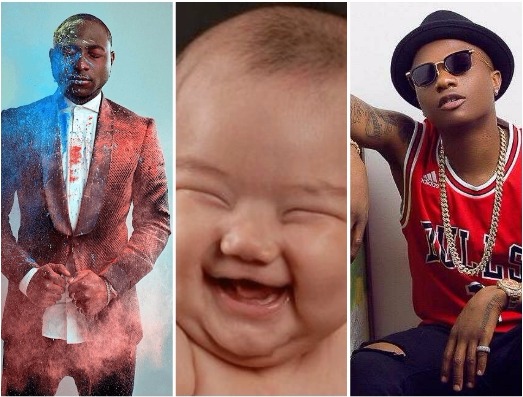 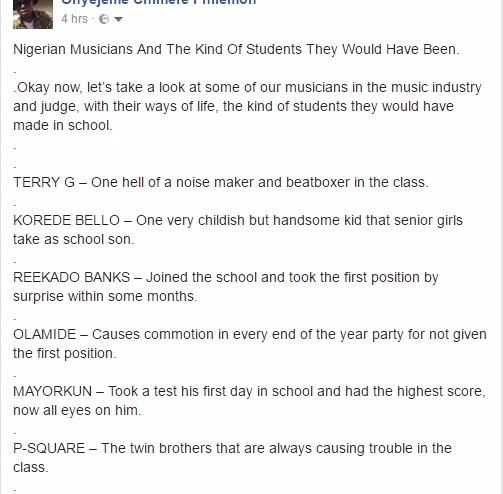 TERRY G – One hell of a noise maker and beatboxer in the class.

REEKADO BANKS – Joined the school and took the first position by surprise within some months.

Continue after the cut

OLAMIDE – Causes commotion in every end of the year party for not given the first position.

MAYORKUN – Took a test his first day in school and had the highest score, now all eyes on him.

P-SQUARE – The twin brothers that are always causing trouble in the class.

B-RED - Has all the textbooks in d world, has d opportunity to see question papers before exams, most comfortable boy in class, but still ends up carrying last after term exams.

DAVIDO – Likes to brag about his father, flaunts wealth & brings a bottle of whisky in the class room everyday

PHENOM – Very obedient student but came to school once & never showed up again.

YCEE – One of those thugs that sit in the back inside class discussing which girl to toast next.

WIZKID – So obsessed to girls in the class, almost all girls are crushing on him.

VECTOR – Nobody understands him as he shows up in school once in a month.

SKALES – Always wearing fancy clothes and gold accessories to school but wouldn’t be able to afford snacks during break.

DON JAZZY – Oldest in the class, loves food a lot, always shouting he is a boss and a hell of a bully.

ICE PRINCE – Performs averagely in class, but bags awards for the school.

KCEE – Likes to draw nonsense on the chalkboard.

TIWA SAVAGE – Bad LovePeddler and twerks in front of the class even though she has a boyfriend in the other class.

TEKNO – One cheese boy that girls fall for. Always busy with his dancing crew and never comes for classes.

PATORANKING – One hell of a stoner and caught almost everyday smoking weed inside school farm.

SIMI – One freaky dirty girl with the torn clothes, but has a sharp mouth.

REMINISCE – One of the most wanted gangstars in the class. Always talking about broken bottles but never broke one.

VIKTOH – Just one chronic failer, so dumb gets zero in every exam.

SHAYDEE – Nobody notices him in class even though he moves with the biggest and most brilliant boys.

KISS DANIEL – That very cool, calm and very brilliant guy in the class.

FLAVOUR – The loner, goes alone to d sports field everyday with guitar to sing loudly to himself.

IYANYA – Likes to take his shirt off and shows his chest to impress girls.

EVA – The lesbian and has a knife in her schoolbag, no girl messes with her.

TIMAYA – Always got hiccups and lazy to speak.

LIL KESH – He is brilliant, hardworking but very vulgar and hell of a late comer.

D’BANJ – Doesn’t listen to the teacher, feels he knows it all & never bring books to class.

ADEKUNLE GOLD – The shy and quiet guy, has a crush on a girl but can’t speak to her.

PHYNO – Noise maker and impossible to be heard when talking

YUNG6IX – Likes to hide other students study books, very unserious and unstable, but has better grades than the serious ones.

2FACE : The teacher that impregnated most of all d students……