A 12-year-old girl, yesterday, gave a startling revelation of how her father and his step-son allegedly took turns to rape her for seven months in Ilogbo area of Lagos.

She said it started with her father and his mistress holding her legs apart for the woman’s son to rape her. 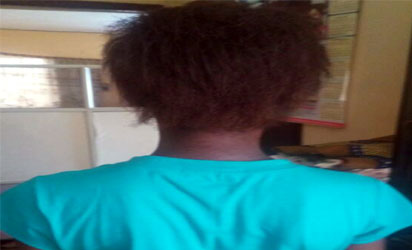 At the moment, the victim, who was alleged to have been forced out of school while in Junior Secondary School 1, had been treated for several sexually-transmitted diseases allegedly contracted during the said period.

Vanguard was informed that the suspect, identified simply as Adimawu, a commercial bus driver, took his daughter away from their Isheri apartment in May 2016, following a misunderstanding with his wife.

He reportedly took her to his mistress’ home at Ilogbo. During her stay there, the victim was stopped from going to school, as she was assisting her father’s mistress to sell oil bean seed, otherwise known as ugba, at the Alaba International Market.

Narrating how she was violated, the victim said;

“One of my father’s mistress’ son, Kenneth, crept to where I slept on the floor one night and started touching my private parts. I woke up and rushed to inform my father, who was sleeping on the bed with his mistress. But he drove me back, saying I should allow him do whatever he wanted to do with me. My father came to where I was sleeping and, with the assistance of his mistress, parted my legs and instructed his stepson to have sex with me. The next day, after everyone had gone out, my father called me inside, locked the door and had sex with me. He warned me not to tell anyone about what happened, threatening to kill me if I did. Since then, my father and his stepson had taken turns to rape me. At times, when I went to sell ugba at Alaba, his stepson would take me to an uncompleted building, where he would place some cartoons on the ground and rape me.”

Vanguard learned that after police and family members’ intervention, the suspect brought his daughter back home in December 2016. But her mother, who claimed to have been suspecting that all was not well with her daughter, subjected the latter to questioning, in the process of which she opened up.

The victim’s mother told Vanguard that she caught her husband with his manhood inside their daughter’s mouth when she was nine months. She said it happened again when the victim was six years.

Narrating how this latest development came to the fore, she said: “I discovered something strange about the way she was walking when she returned home.

“When I asked her initially, she did not talk until I involved one of her teachers, who was taking her extramural classes, before she opened up. When I confronted my husband, he beat me to stupor and drove me and my daughter away. We have been staying with a relative since December 2016."

“I had gone to the market to buy foodstuff one day, only to return and discovered that my daughter was missing. When my husband came back, I asked him about her whereabouts, he denied knowing where she was, saying I should look for her. Even when the matter of our missing child was reported to the police, he denied knowing where she was until December, when he said he took her to learn a trade at a relative’s. It took the intervention of the police and some relatives before he brought her back last December.”

Asked why he took the child away from home, the suspect told policemen at the Human Right Desk, Ikotun Police Division, that his wife had a mental problem, adding that he had to take their daughter away from home to ensure her safety.

In a swift reaction, his wife described the claim as a lie, saying “I was never mad, neither was I ever sick. The emotional and psychological effect during the period I was searching for my only child made him conclude that I was mad.”

She further disclosed that her husband’s action was only a ploy to chase her away from the house they both built so he can bring in his mistress and her children.

Vanguard gathered that the case was reported to police at Idimu by Sir Barth Ozoana, a legal practitioner, consequent upon which the suspect was arrested last Wednesday.

However, during interrogation, the suspect described the allegations as lies. Police sources hinted that the suspect earlier admitted to the claim that his stepson raped his daughter.

As at yesterday, Vanguard was informed that the case would be transferred to the command headquarters, Ikeja. Lawyer to the victim, Ozoana, said he would assist his client and mother legally, until justice prevailed.