The first large Made-in-China passenger jet today made its maiden test flight from Shanghai, a symbolic milestone in China's long-term goal to break into the Western-dominated aircraft market.

The narrow-body C919 jet — white with green and blue stripes — soared over Pudong international airport in the commercial hub Shanghai as a crowd of thousands cheered.

Built by state-owned aerospace manufacturer Commercial Aircraft Corporation of China (COMAC), the plane represents nearly a decade of effort in a government-mandated drive to reduce dependence on European consortium Airbus and US aerospace giant Boeing. 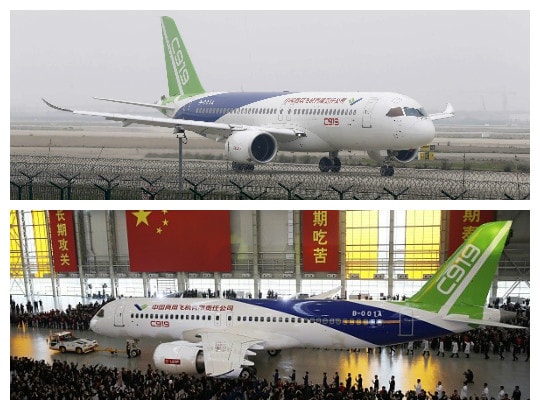 With the takeoff, China's official Xinhua News Agency said the country had become "one of the world's top makers of jumbo aircraft," becoming the fourth jumbo jet producer after the U.S., Europe

It was originally due to fly in 2014 before being delivered to buyers in 2016, but has been beset by delays blamed on manufacturing problems. It's now unlikely to carry commercial passengers until at least 2019.

If the one-and-a-half-hour test flight is successful, the aircraft's maker, state-owned Commercial Aircraft Corp. of China Ltd., or Comac, will then seek certification from China's civil aviation authority and foreign regulators before making any deliveries.

Bao Pengli, deputy director of Comac's project management department, said Thursday the manufacturer planned to make two planes a year from now to 2019 to obtain proof of safe flight, before any mass production would be started.

The jet's development is a key step on the path laid out by Chinese leaders to transform the country from the world's low-cost factory into a creator of profitable technology.