The Senate President, Bukola Saraki has told the Code of Conduct Tribunal (CCT) that he has no case to answer in the charges of false declaration pf assets brought against him by the Federal Government since 2015 shortly after he emerged as the Chairman of the National Assembly.

He announced to the tribunal his readiness to file a no case submission in the charges to establish that he was not in any way been linked with any crime or prima facie  established against him since the trial started. 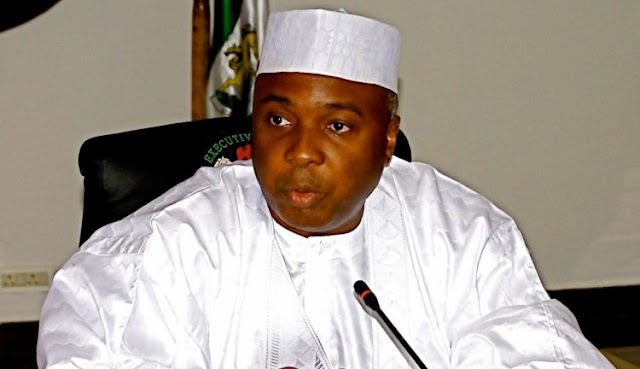 Saraki, through his counsel, Mr. Paul Erokoro (SAN) informed the Tribunal headed by Hon Dandali Yakubu Umar that he will need the complete record of proceedings since 2015 when the trial started to enable him review the evidence so far adduced by government and to make his no case submission in line with the provisions of the law.

concluded the prosecution of the charges against him after calling four witnesses and tendering several documents to establish a case of false assets declaration against the defendant.

Rotimi Jacobs (SAN), who has led the prosecution team since the trial commenced did not object to the announcement of Saraki to file a no case submission on the ground that it is the defendant's right to do so.

Jacobs however pleaded with the Tribunal to consider time factor in View of the fact that trial had dragged since 2015.

Chairman of the Tribunal, Umar, after consultation with parties in the matter, fixed June 8, 2016 for the Tribunal to adopt the written submissions expected to be filed and exchanged by the prosecution and the defense.

At the resumed trial yesterday, a prosecution witness, Mr. Bayo Dauda had informed the Tribunal that the documents allegedly used for foreign transactions by Saraki were not in possession of his bank.

The witness, who came from one of the banks to tender some documents and give evidence, informed the Tribunal that all efforts to locate the documents were unsuccessful because the transactions had taken place long time ago.

Besides, the witness further said that he had no address of any proper bought in London by Saraki with the alleged foreign remittances.

He however admitted that Saraki, like any other customer took loans three times from his bank to purchase properties and that the loans had been repaid in line with terms of agreement guiding the loan agreement.

The witness informed the Tribunal that the defendant, apart from not defaulting in the payment for the three loans also complied with other terms which included the submissions of the tittle documents of the properties to bank purchased with the loans.

Dauda further stated that Saraki also had a comprehensive insurance on the properties acquired with the loans.

It will be recalled that the Federal government had, in 2015 dragged Saraki before the Tribunal accusing him of failure to declare his assets as required by while he served as the executive governor of Kwara state and when he emerged as a Senator from Kwara.

It will also be recalled also that the Federal government had amended the charge against Saraki four times before finally closing the case against the Senate President.