Iranian Man Detained By Police For Looking Like Lionel Messi


Reza Parastesh, an Iranian student, looks so much like Lionel Messi that it almost landed him in jail for disrupting public order this week.

So many people came out to take selfies with Parastesh in the western city of Hamadan over the weekend that the police rushed him into a station and impounded his car to stop the chaos and clear traffic. 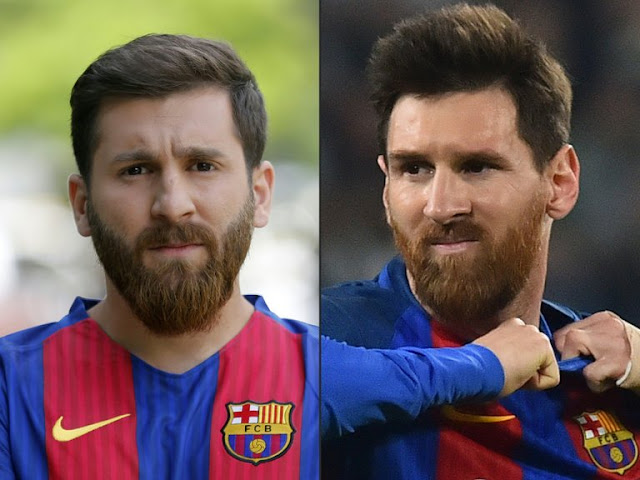 The furor began a few months ago when Parastesh’s soccer-mad father pressured him into posing in a No. 10 Barcelona jersey and sending the pictures to a sports website.

“I sent them one night and by the morning they had called me and said I should come in quickly for an interview,” he said.

Despite his early reluctance, Parastesh, 25, soon grew into his new role, cutting his hair like Messi’s and often donning the jersey when going out.

It has paid off — he is fully booked with interviews and has even landed modeling contracts.

“Now, people really see me as the Iranian Messi and want me to mimic everything he does,” he said. “When I show up somewhere, people are really shocked.”

Iranians are obsessed with soccer, and Parastesh finds himself constantly besieged by fans looking for a selfie.

“I’m really happy that seeing me makes them happy and this happiness gives me a lot of energy,” he added.

Parastesh loves soccer but has never played professionally, though he is working on some tricks so he can better play the role.

He remembers well the last game between Iran and Argentina during the 2014 World Cup, when Messi’s 91st-minute goal robbed the Islamic republic of a place in the last 16.

“After the game, my dad called me and said: ‘Don’t come back home tonight. Why did you score a goal against Iran?’ I said, ‘But that wasn’t me!’” Parastesh said, laughing.

His goal now is to meet his hero in Barcelona, and maybe even land a job as his understudy.

“Being the best player in footballing history, he definitely has more work than he can handle,” he said. “I could be his representative when he is too busy.”