A member of 'Females in Nigeria' group on Facebook, which Charity Aiyedogbon a.k.a Chacha belonged to before she went missing, reportedly nagged her husband of 9 years to death. According to Facebook user, Azubuike Chinenye, the lady's late husband who was pushed into having a girlfriend outside his marriage,  reportedly died of cardiac arrest because his wife 'won't give him peace at home.' 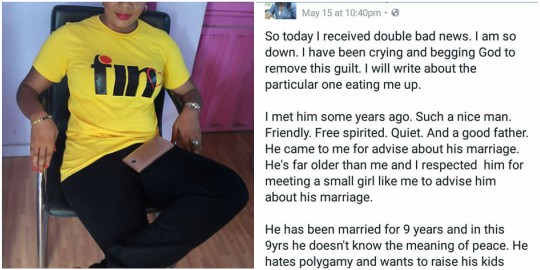 "So today I received double bad news. I am so down. I have been crying and begging God to remove this guilt. I will write about the particular one eating me up.

I met him some years ago. Such a nice man. Friendly. Free spirited. Quiet. And a good father. He came to me for advise about his marriage. He's far older than me and I respected him for meeting a small girl like me to advise him about his marriage.

He has been married for 9 years and in this 9yrs he doesn't know the meaning of peace. He hates polygamy and wants to raise his kids under one roof. His wife wasn't his first love. He visited his father and his family introduced her to him as his wife. He refused telling them he has someone already and he's waiting for her to be done with her masters. Long story short, he visited again, she was in the house, she served him his meal, he was drowsy, he managed to bath and slept off. He woke up the following day and felt uneasy like someone had sex with him.

After some months, he noticed he kept visiting home and started developing love for this girl. He tried resisting the temptation and told his love he wanted to get married, that since she's done with her masters, she should return and let him do something. She refused that she wants to stay back and do her PhD. He kept persisting until the girl broke the news that she's pregnant.

Years later, he helped her get a job, told her not to disturb spending her money in the house since he's wealthy. Unfortunately she became something else. No respect. No love. No care. Always shouting, any little thing is quarrel, today he's a fool next day he's a weakling. He's an educated man at least a PhD holder and he managed his home well, there's nothing like authority or "I'm the head", " be submissive ". He made his home a friendly place.

She became a nag, he kept enduring. Several times he reported her to her family yet she won't change. She started abusing him, became violent, killing his emotions. He has sat her down several times asking what the problem is, sometimes it is her car which he must change and he obeyed yet no peace. Another time, her phone yet no peace. Later, she needs vacation to different countries yet no peace.

Jhoy, I met a young girl at the airport when my flight was delayed. Her battery was down and she used my phone to call her brother who was to pick her up from the airport. We discussed the economy meltdown, boarded, landed and that was it. In the evening, she called to thank me for the benevolence and from then, she sends me happy new month messages and goodwill texts. I finally picked up courage to call her on her birthday that's 9 months after meeting, sadly she was hospitalized due to appendectomy. I was worried and still kept in touch. Madam, finally we started dating. Its been 2years and this girl gives me peace of mind. She respects me. Gives me business ideas which helped boost my career. She's everything I want in a woman but I'm married.

After much advise, I concluded by telling him that I don't support adultery. Try and fix your home. No woman wakes up to be abnormal towards her husband if something didn't trigger it. Please take her on a date and ask her where you've gone wrong. I pray she talks but keep me posted. He agreed.

A week later he gave a feedback that she finally opened up and said, her mother advised her to be firm so that he will have fear for her and not misbehave. I laughed through out the date and assured her that I am not that kind of man. I told her the best way to win my heart is giving me peace. I want a lovely home. A peaceful home and I promised not to give her any reason to to feel insecure. Now, how do I tell this other girl that my wife is a new person. I told him, just tell her the truth. From all you've said that girl sounds like a good person.

After a long time, he sent a chat telling me how she hasn't changed and they had a minor misunderstanding because he put the nanny's name on their business class trip to Dubai, that he should fix her younger sister not the nanny. He refused that it will be unfair of him and before he will start his car, she used her kitchen pestle to destroy my windscreen. I have been in a hotel for two days just to clear my head. I even miss my kids badly. I begged him to calm down and pray. I went ahead to request for her Facebook handle which he gave. I monitored her page and found out she's a FIN member. Well, I told him to use prayers and help his wife. He still complained about her late nights and frivolous lifestyle. In his words, Jhoy I'm sorry I have to call my girlfriend. She gives me peace.

Last month, I met with his wife at an event and she came to congratulate me for being a strong woman. In her words, well its because you're not firm. My husband can't even try such with me. If he says one, I have said ten. I laughed and said, then your home is a battle field because your husband might be lacking peace. She said, who cares? No man can control me oh... If you're hard, they will fear you and do nothing. I smiled, I hugged her and said, whatever rocks your boat I wish you the best.

I finally met her husband and he came with his girlfriend. She's such a beautiful and intelligent woman. I almost gave them my blessings. I still preached against adultery and encouraged him to work on his home but I still supported him and said, no matter what do what makes you happy. Any home that lacks peace isn't a home.

This night his girlfriend called to break the news that he's dead. He died of cardiac arrest. How? His wife asked him to allow her organise a children's day picnic where she'll invite her friends and he said no problem remind me on Wednesday. She seized his keys and demanded he writes a check immediately. He insisted giving her on Wednesday and walked out to share with the kids in their car. On their way he complained of not being able to breathe. He was rushed to the hospital where he died and the driver called his girlfriend first where she was able to kiss him final goodbye.

I have been crying. I feel bad. Why didn't I advise him to divorce. Why didn't I tell him to marry his girlfriend. Why do I feel like his ghost is behind me. God please make him wake up. He's too nice to die. Someone please wake me. Wake meeeee. God give him another chance. Allow me advise him to cheat. He only married a bad wife. He doesn't deserve death.

Friends please I need your support and prayers. This news is too much to bear. God please.