English artist Damien Hirst has been accused of cultural appropriation after his exhibition, "Treasures from the Wreck of the Unbelievable," featured a "golden head" that appears to mirror sculpted heads created by African artists from Ile-Ife Nigeria. Cradle of the West African Yoruba culture. 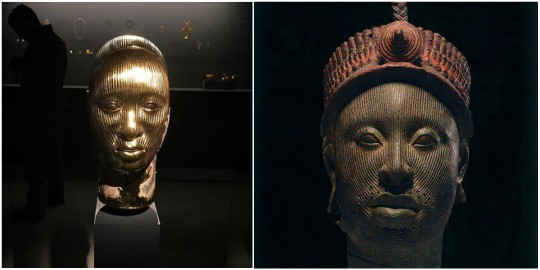 "For the thousands of viewers seeing this for the first time, they won't

think Ife, they won't think Nigeria," Nigerian visual artist Victor Ehikhamenor wrote on his Instagram page, along with a picture he took of Hirst's "golden head" behind glass.

"The British are back for more from 1897 to 2017. The Ooni of Ife must hear this. "Golden heads (Female)" by Damien Hirst currently part of his Venice show "Treasures from the Wreck of the Unbelievable" at Palazzo Grassi. For the thousands of viewers seeing this for the first time, they won't think Ife, they won't think Nigeria. Their young ones will grow up to know this work as Damien Hirst's.

As time passes it will pass for a Damien Hirst regardless of his small print caption. The narrative will shift and the young Ife or Nigerian contemporary artist will someday be told by a long nose critic "Your work reminds me of Damien Hirst's Golden Head". We need more biographers for our forgotten. #ifesculptures #classicnigerianart #workbynigerianartist #ifenigeria #lestweforget #nigeria #abiographyoftheforgotten"

"A reference to the Ife heads is in the text accompanying the work and in the guide to the exhibition and is integral to the concept of the work."Hirst initially declined to talk with CNN, instead referring questions through a spokesperson to curator Elena Geuna.

"One of the sources of inspiration for the exhibition is the collection of the British Museum, in London, where the Ife heads are displayed," Geuna said.

"An Ife head from the British Museum collection has also been included in the famous book, 'A History of the World in 100 Objects' by the former museum director Neil MacGregor."

"The Damien Hirst work does mirror that of the Ife craftsmen of the early 14th-15th Century," the SOAS statement read. "The form of the Hirst head, with its striations, clearly echoes those Ife examples which emerged from the sacred shrine at Wunmonije Compound in the 1930s."

Our Crowned head. Kingdom of Ife