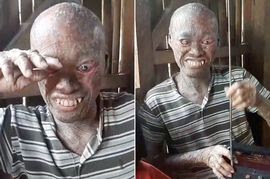 A man with a rare skin condition, which makes his face look like he has been burned in a fire, has been relentlessly bullied his entire life by people who think he is cursed.

Some people even believe Antonio Reloj, who was born with a severe form of ichthyosis which causes his skin to harden, crack and appear burned, is not actually human.

The 26-year-old's mother abandoned him when he was 12, leaving his grandmother to raise him in remote Aklan province, in the Philippines.

Antonio's condition worsened as his skin became thicker and harder, and his eyesight started to deteriorate as it spread across his face.He used to enjoy visiting the local market and church but now spends his days hidden in a wooden home after residents started to believe he was an evil spirit and not actually human.

Antonio now has some hope of being treated after Good Samaritans took him to capital city Manila to help him find treatment.

Antonio, who dreams of becoming an electrician, said he spends his days listening to the radio and tinkering with the electronics.

He said: ''When I was a child I was happy to go outside. People say that I am a ghost. I stay at home now.