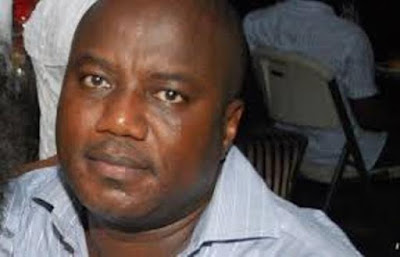 The trial of Gentry Olanrewaju, the estranged husband of Nollywood star actress, Mercy Aigbe at an Ikeja Chief Magistrate Court, Ogba, was today stalled owing to the absence of his wife.

Although Gentry was in court today, accompanied by some associates, Mercy Aigbe was reportedly said to have travelled out of the country.

Officials of the Lagos State Domestic Sexual Violence Response Team (DSVRT) and Gentry met with the trial Chief Magistrate Folakemi Davies-Abegunde behind closed door in her chamber and agreed on June 7 for the estranged couple to appear before the court.

Gentry, dressed in a navy blue coloured buba and sokoto with a matching sandal sat at the back of the court room in-between family members and associates.

When he stepped out of the court into the lobby, same family members and associates stepped out with him and ensured that nobody come close to him.

Chief Magistrate Court Folakemi Davies-Abegunde had fixed Wednesday for Gentry to show cause why he should not be “restrained permanently” from coming close to his wife, Mercy Aigbe.

Mercy Aigbe, on the other hand, is expected to tender before the court, through her counsel, Adeola Falade, the medical report of the alleged domestic violence meted on her by her estranged husband.

Adeola Falade had on April 28 approached the court, on behalf of Mercy Aigbe, to ask for restraining order against Gentry over alleged violence against his wife.

In their application, Falade alleged that Gentry had gone to his wife’s tailor’s place “to attack and beat her mercilessly “.

To prove the case, Falade had tendered five photographs and copies of the medical scanned report of the applicant.