Igbos Are Major Stakeholders In Nigeria, Any Move To Divide The Country Will Be Resisted- Iwuanyanwu 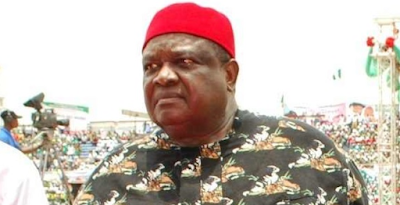 Eminent businessman and politician, Emmanuel Iwuanyanwu, on Wednesday said that the Igbo do not want to secede from Nigeria.

Speaking as a special guest of honour at a National Unity summit organised by Arewa Ambassadors Congress of Nigeria in partnership with Youth Assembly of Nigeria, Iwuanyanwu said that the people of the South East zone would fight anybody who wanted to secede from Nigeria, including the Arewa and Oduduwa people.

The program which held in Owerri, the Imo State capital, had youths across Geopolitical zones taking part in the conference.

He said that the Igbo were major stakeholders in the country and would not be party to any move to divide it.

According to him, the federal government did wrong to have arrested the leader of the ingenious people of Biafra, Nnamdi Kanu.

He said,  “He (Kanu) only expressed his view. No arm was found in his possession. We are Biafrans

and we are not ashamed to say it. Igbo have invested more in Nigeria than Arewa and Oduduwa. We want to be one Nigeria in fairness.”

Iwuanyanwu said that the Biafra Republic was somebody’s personal opinion, adding that the Igbo youths were rebelling only against the injustice done to the region.

“Biafra is not about secession. It is a name of a particular people in Nigeria from the South East.

He, therefore, challenged the Nigerian youths to work for the growth of the country and shun tribal and religious sentiments, adding that the country had the capacity to become one of the best countries in the world in the years to come.

Iwuanyanwu accused the federal government of currently marginalising the Igbo people, simply because the zone voted en masse for the people’s Democratic Party in the last presidential election.

The governor of the state, Rochas Okorocha, told the youths to uphold the Unity of the country where ever they went.

Represented by his special Adviser on Northern affairs, Faisal Lawan, Okorocha identified cultism as one of the vices working against the growth of young Nigerians.

The president of AACN, Esinrogunjo Musbaudeen, asserted that the essence of the summit was to stress the importance of National unity and integration, adding that the political class had to give more young people the opportunities to showcase their leadership prowess.