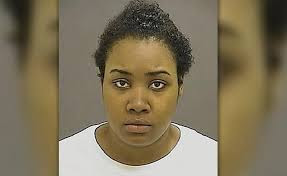 A Baltimore day care worker was arrested after police found disturbing video of the caretaker assaulting an 8-month-old girl who died.

Authorities were called to the Rocket Tiers Learning Center on Tuesday, responding to a report of a baby who wasn't breathing. When cops arrived, EMS workers were performing CPR on the infant, identified as Reese Bowman.

The child was taken to a local hospital, where police said she died shortly after her arrival. According to CBS Baltimore, surveillance video at the child-care facility showed 23-year-old Leah Walden several times violently snatched Bowman out her crib by one arm.

The worker was also seen putting blankets over the infant, covering her face, and then placing pillows on the girl's head. At one point in the horrifying video, Walden appears to slap Bowman in her face.

Authorities said they don't know why the caretaker attacked the innocent little girl, and they believe Bowman was awake during the assault.