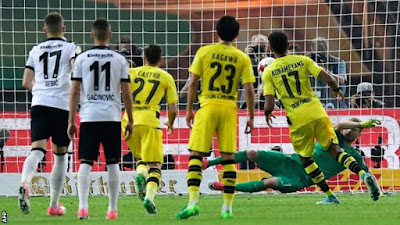 Pierre-Emerick Aubameyang's penalty won the German Cup for Borussia Dortmund as they beat Eintracht Frankfurt 2-1 and ended a run of three final defeats in a row.

Ousmane Dembele’s strike in the eight minute was cancelled out by Ante Rabic in the 29th-minute before Aubameyang then chipped his 40th goal of the season from the spot after Christian Pulisic was brought down.

The striker's future at Dortmund is the subject of intense speculation, having reportedly handed in a transfer request, and has been linked with Manchester City and Manchester United, as well as Paris St-Germain.

Victory provided a positive finish to a difficult season for Dortmund, who finished third in the Bundesliga, and suffered trauma when their team bus was damaged by an explosion before a Champions League quarter-final match against Monaco on 11 April.