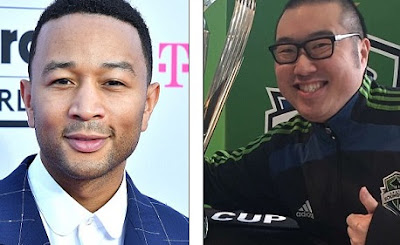 Over the weekend, he was quite surprised to see that someone named John Stephens, had donated $5,000.

Lew created the campaign about three weeks ago and the $5,000 donation is the largest amount contributed by a single donor.

As of Monday afternoon, the campaign has raised more than $34,000.

On Sunday evening, Legend also responded to Lew's tweet that thanked him for the donation.

'My pleasure! We should have free lunch for all of our public students!' Legend tweeted.

Legend doesn't have any ties to the area, but his model wife, Chrissy Teigen, grew up in Snohomish.

On GoFundMe, Lew wrote that his child attends one of Seattle's public schools, where if a student owes $15 or more for meals, schools provide a modified meal.

In some cases, when a student doesn't have enough money for lunch, cafeteria staff take away the child's tray of hot food and hand the student a brown paper bag containing a cold cheese sandwich and a small milk, according to CNN.

This practice is what some call 'lunch-shaming', which Lew says 'is an awful thing and it should not be happening'.

Children need to eat regardless if they have money or not,' he wrote on GoFundMe.

'As a parent and graduate of the Seattle Public Schools, I am trying to help ease the burden of these families and make sure these children get to eat a nutritious meal each day at school,' he wrote.

Lew said the additional money raised for the schools will go into a fund to cover future debts through the end of the school year and beyond.