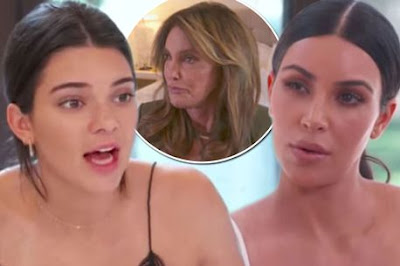 In clips from an upcoming episode of Keeping Up With The Kardashians , the sisters are extremely unhappy about the contents of Caitlyn's book, and mainly, what she says about their mum Kris Jenner.

In The Secrets Of My Life, Caitlyn , formerly Bruce Jenner, talks about her life-long struggle with gender issues, her life with Kris and the kids, and her transition.

But Kendall and Kim don't like what they read. In a 15-second clip, Kendall , 21, is seen losing it over the book.

It begins with 67-year-old Caitlyn telling step-daughter Kim that the book is her "story".

Kendall then asks Kim: "You read the whole thing? What does it say?"It then cuts to her talking to Kris , who looks a little glum.

Kendall is slapping her hands on the kitchen counter and saying: "It's insane, mom. That's insane."

And in another video, Kim is chatting to sister Kourtney about what she's read, and she has a few things to say about Caitlyn's version of events.

She says: "So Caitlyn brought me her book, and I read it to be fair. I feel like I'm really fair."

Kourtney asks: "Did you read the whole thing? Because I was thinking, is mom really exaggerating?"

And Caitlyn discredits mom. She said, 'I didn't see a dime of my money'. She was insinuating that mom like took the cheque and pocketed the money and had these huge savings."

Kim and Kourtney then discuss the part of their lives that "no one sees", when Kris and Bruce first moved to Hidden Hills and were borrowing money off family to pay the bills.

Kourtney says Kris and Bruce "made that money together", and the girls insist it wasn't going in their mom's pocket.

Kourtney adds: "She changed Caitlyn's career and she made her have this motivational speaker business."

Kim adds: "And then she says, 'The Kardashians were so upset when their names weren't mentioned in Diane Sawyer, but that was all deliberate.

"And that sounds pathetic," says Kourtney.