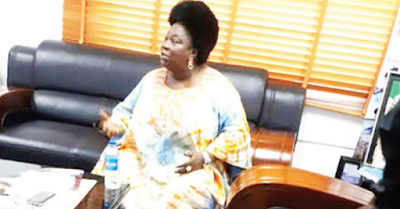 There was a mild drama at an Ebute-Meta Magistrate’s Court on Thursday after a 58-year-old textile dealer, Mrs. Taiwo Momoh, was discharged for offences bordering on attempted suicide.

After the court announced that her case had been dismissed as recommended by the Directorate of Public Prosecutions, Momoh stepped out of the dock, knelt down and started giving praises to God.

Immediately she got out of the court, she covered her face with two sets of clothes and hastened towards the back gate of the court.

After flinging the gates open, a resident asked if she was in purdah, which she denied and ran off with her face still covered.

One of her counsel said she wanted to avoid the harassment of journalists and people in the community. We are so happy for her.