Osun Doctors Might Go On Strike Over Half Payment Of Salaries 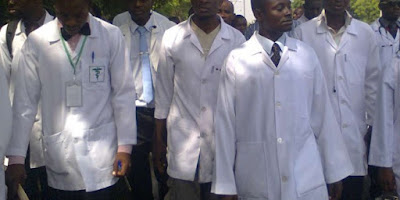 Doctors under the aegis of the Nigerian Medical Association in Osun State on Thursday staged a protest to press home their demand for the stoppage of payment of half salaries to doctors by the state government.

Some of the protesting doctors, who were dressed in lab coats and branded shirts, marched from LAUTECH Teaching Hospital, Osogbo to Olaiya and some of the major streets in the state capital.

Singing anti-government songs as they marched through the streets, the doctors also said that there were no drugs and equipment in state government-owned hospitals despite the claims of the state that it had spent N10bn to improve the sector.

The Chairman of the NMA in the state, Dr. Tokunbo Olajumoke, who addressed journalists during the protest, blamed lack of equipment and drugs for the death of Senator Isiaka Adeleke, who died on April 23.

Olajumoke said Adeleke was not taken to the government hospital very close to his residence because he knew the hospital lacked drugs and equipment to handle emergency cases.

He said the doctors might consider the option of strike if the protest failed to achieve the desired result.

He said, “We went on strike because of half salaries and after about eight months we resumed. They promised to pay us but they did not. Some other health care practitioners went on strike for about six months and the government paid them. Why should our own be different?

“They have been paying us half salaries since July 2015; it is almost two years now but doctors cannot render half treatment to patients. Half salaries should stop, it is illegal!”

The new Commissioner for Health, Dr. Rafiu Isamotu, could not be reached on his telephone for comment.

The first call placed to his telephone indicated that the line was engaged and our correspondent sent a text message to the same line for his reaction to the claims of the doctors.

However, subsequent calls placed to the line some minutes later indicated that the line had been switched off.