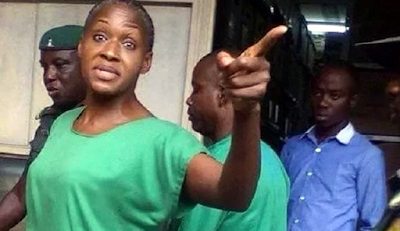 Kemi Omololu-Olunloyo, a social media enthusiast and daughter of a former governor of Old Oyo State, Omololu Olunloyo, has accused the chief registrar attached to the Port Harcourt Division of the Federal High Court of sitting on her case in order to keep her perpetually behind bars, despite having allegedly met her bail conditions.

But Maimunat Folami, the Deputy Chief Registrar, strongly denied the allegations, stating that her office had cooperated fully with Ms. Omololu-Olunloyo’s counsel to ensure proper vetting of her bail documents.

“We have done everything that we’re supposed to do,” Ms. Folami said. “This allegation is very strange.”

Ms. Omololu-Olunloyo spoke inside Port Harcourt Prison, where she had been remanded since her initial arraignment in mid-March for alleged criminal defamation against a Port-Harcourt-based preacher, David Ibiyeomie.

Speaking with Premium Times inside the office of the Comptroller of Prisons in Rivers State, Ifeanyi Amaliri, last week, Ms. Omololu-Olunloyo stated that her lawyers had satisfied all bail requirements set by H.I.O. Shamah, a federal judge who granted her bail on April 11.

She said she had strong indications to believe the deputy chief registrar was sitting on her case on alleged orders of some powerful interests. But the court registrar said the accused’s bail paperwork was still being perfected by her lawyers, with whom she said she had been in constant touch with.

“I have to do all the works of ensuring that all the documents are put in place,” Ms. Folami said.

“Even if the documents are put in place, we still have to conduct certain investigations, like verifying the addresses of the sureties to be sure they are who they say they are.”

Peter Nkanga, the West Africa representative of the U.S.-based Committee to Protect Journalists, condemned Ms. Omololu-Olunloyo’s continued incarceration for over 78 days and counting, despite all bail conditions met since May 11, including signing an undertaking not to jump bail.

“It is an outrage that the judiciary can be taking over three weeks and counting to verify Ms. Omololu-Olunloyo’s bail requirements, at the expense of her freedom,” Mr. Nkanga told Premium Times.

Fatai Lawal of Afe Babalola Chambers, which is representing Ms. Omololu-Olunloyo, spoke to Premium Times but declined to blame the registrar for the challenges faced in perfecting his client’s bail requirements.

“We’re confident about her possible release this week,” he said.

A team of police officers first arrested Ms. Omololu-Olunloyo in Ibadan on March 13.