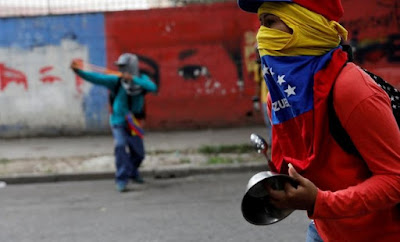 Banging empty pots and brandishing signs saying "only the government is growing fatter," Venezuelan activists in Caracas on Saturday protested food shortages in the crisis-stricken country.

Protesters are demanding early presidential elections, freedom for jailed activists, and humanitarian aid to allow in scarce medicines and food.

Around 93 percent of Venezuelans cannot afford to buy enough food and 73 percent of them have lost weight in the last year, according to a recent study by three universities.

Children begging in front of bakeries, restaurants, or markets are now a common sight, while more and more people are salvaging food from the trash. Many in the middle class have had to cut back on meat or vegetables and instead get by on cheaper starches. Pretty sad!