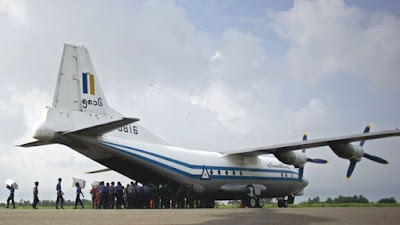 The Burmese army says debris and bodies have been found after a military plane went missing with 122 people on board.

Dispersed wreckage was found in the Andaman Sea, the military said in a statement on its Facebook page.

The aircraft, a Y-8 transporter made in China, was carrying 14 crew. Most of the passengers were military personnel and family members, including children.

The plane was flying from Myeik to Yangon and the debris was found in the sea off the coastal town of Dawei.

Communication with the flight was lost on Wednesday half an hour into the short routine trip.

According to the military, search teams this morning found 10 bodies, including that of a child, as well as a wheel, several life jackets and some luggage. The main part of the plane has not yet been found.

Should everyone on board have died in the crash, the death toll would make it among the country's worst aviation disasters.

The reason for the crash remains unclear. There has so far been no report of a mayday call and the dispersed nature of the wreckage suggests it could have broken up in mid air.