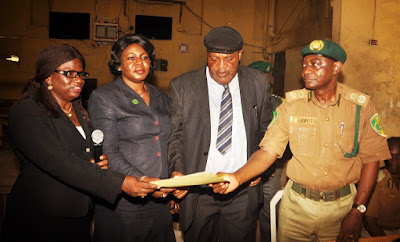 The Lagos State Advisory Council on Prerogative of Mercy on Thursday handed an order to the Nigerian Prisons Service for the immediate release of 18 inmates serving life sentences at the Kirikiri Maximum Prison.

The order was handed over to the Service through the State’s Controller of Prisons, Olatunbosun Ladipo.

The 18 inmates, who included 15 male and three females serving life sentences for various offences, and having spent more than 30 years in incarceration, were recommended for immediate release by the Council on compassionate grounds.

The inmates were ordered to be released having been found to have fulfilled the very stringent conditions for their freedom.

Speaking at the small handing over ceremony held at the hall of the Kirikiri Maximum Prison, Chairman of the Council, Oyelowo Oyewo, applauded the benevolence of the State Governor, Akinwunmi Ambode, in assenting to exercise the prerogative in favour of the recommended inmates.