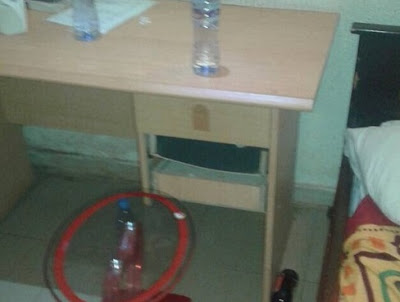 A married woman has died in a hotel room in Enugu while “enjoying” with her lover during a one-night stand.

A statement by police spokesman Ebere Amaraizu, a Superintendent of Police (SP), said the deceased was identified as Mrs Ifeyinwa Udeh of Ugboezeji in Abakpa Nike of Enugu State.

The statement said: “On that fateful day, the deceased with her lover, identified as Joel Ugwu of Abakpa in Enugu State, had allegedly checked into one hotel located around Nowas Junction of Transekulu in Enugu.

“She was later confirmed dead by a doctor at St Leo’s Hospital Transekulu after suddenly falling ill and becoming unconscious. “She was taken to the hospital for medical attention at 11.15 p.m by her lover.”

The statement said Ugwu, who is in police custody, is assisting the investigation on the incident.

It said the suspect confessed that he and Ifeyinwa “comfortably checked into the hotel on that fateful day, but later, the lady lover started complaining of ill health. According to the suspect, she was immediately given a bottle of malt drink and bottled water, which he allegedly bought for her while they were relaxing in the hotel room”.

The police added: “He said following the development, he rushed her to the hospital for medical attention, but she was confirmed dead by the doctor on duty.

“The body of the deceased has been deposited at the morgue of the Parklane Specialist Hospital in Enugu for autopsy.”

Also, detectives from Homicide Section of the police command have begun a full scale investigation into the incident.

The police said they recovered from the hotel room some tablets and capsules as well as other materials, which they said would aid operatives in their investigations.