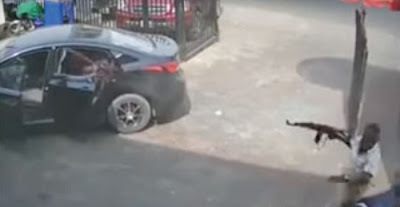 A policeman, who has been described by many Nigerians as a hero after a viral video showed him gunning down one of the four armed robbers who attacked a bank in Imo State in February 2017, died two months after the incident, Saturday Punch has learnt.

He is Sergeant Chukwudi Iboko. The three-minute video, apparently a CCTV footage from the bank, has been circulated on news sites and Forums in the last few days, quickly becoming one of the most talked about events of the past week in Nigeria.

It shows a car entering the bank premises, only to be followed by a black Hyundai Elantra, some seconds later. Four men emerged from the vehicle, with three holding weapons, which looked like AK47 rifles.

The video shows the first person out of the vehicle releasing a shot which caused many people at the entrance of the bank, including the uniformed security man, who opened the gate to flee.

The video shows Iboko who shot him escaping from security post, while one of the other robbers pursued and shot after him. The Imo State Police Command told our correspondent that  owing to the multiple gunshot injuries sustained by Iboko, he succumbed to his injuries two months later while in intensive care.

Spokesperson for the command, Mr. Andrew Enwerem, explained that two other policemen were in the security post during the shootout and also sustained gunshot injuries.

“They were in intensive care for up to two months. The two survived but Iboko died. He was a sergeant and mobile policeman,” Enwerem said.