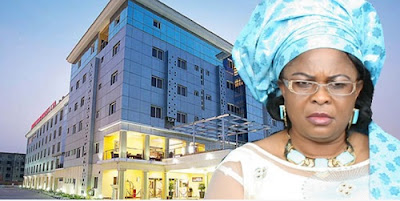 The five-storey hotel is located near Setraco Construction Company, beside Mabushi Kado Expressway.

Although the hotel has not been officially valued by the EFCC, some estate agents within the community told our correspondent that the property should be worth about N2bn.

The property, which has not been officially opened, has between 50 to 100 rooms, a gymnasium, a fountain and other amenities. Punch correspondent, who visited the property on Friday, observed the red inscription, ‘EFCC Under Investigation’ all over the hotel.

One of the mechanics working at a filling station located next to the property said Mrs. Jonathan used to visit the hotel in the past but had not come around since January.

He said, “She used to come here frequently but she has not come in the last six months. The hotel is supposed to have been opened for business but for some reason, they have not done so. It has not even been given a name yet.”

The anti-graft agency is also on the verge of seizing her properties in Port Harcourt and Yenagoa.

Patience first came under EFCC investigation in May 2016 when the commission arrested a former Special Adviser to the President on Domestic Affairs, Waripamowei Dudafa.

She subsequently sued Skye Bank Plc and the EFCC. The commission then went ahead to freeze her personal account with a balance of $5m.

Meanwhile, the commission has seized a mansion belonging to Chidiebere Silas, the Personal Adviser to George Turnah, who is a godson of former President Jonathan.

The EFCC said in a Facebook post that the mansion is located in Abaja Nwangele Local Government Area of Imo State.

The anti-graft agency had last week seized several properties allegedly belonging to Turnah, who is facing prosecution before a Federal High Court in Port Harcourt.

In a related development, Justice Ibrahim Watila of the Federal High court, sitting in Port Harcourt, Rivers State, on Friday ruled that a paramount ruler should stand as a surety, as part of bail conditions for Turnah.

The judge admitted Turnah to bail in the sum of N300m, and two sureties in like sum. Aside from the paramount ruler, whose office should be recognised by the government of the state and his letter of authority verified and deposited in the court, the other surety should be an owner of a property and the original Certificate of Occupancy of the property should be deposited with the registry of the court.

Also, Turnah’s passport or travel document should be deposited with the registry of the court and “the first defendant shall not travel outside Nigeria without leave of the court.”

All the sureties shall sign affidavit of means and bail bond and the first defendant shall be remanded in prison custody pending the perfection of his bail.

Turnah and his seven companies were arraigned on 12 counts bordering on obtaining money by false pretences, money laundering and abuse of office to the tune of N3bn.

Justice Watila adjourned the matter to June 30, 2017 for commencement of trial.