Fayose Is After My Life, Federal Varisty VC Cries Out 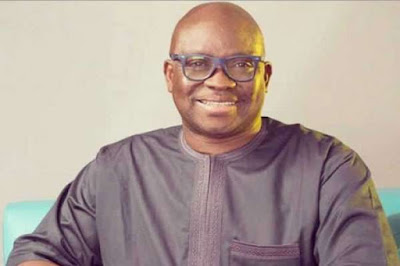 The Vice Chancellor of Federal University, Oye-Ekiti (FUOYE), Prof. Kayode Soremekun, has accused Governor Ayo Fayose of posing threat to his life by giving support to union leaders to destabilize the institution.

The university boss claimed that Fayose sent the Secretary to the State Government (SSG), Dr. Modupe Alade, to the state police headquarters where he union leaders were detained to facilitate their release.

The detained union chairmen allegedly released on Fayose’s order are Ekundayo Ajibaye of the National Association of Academic Technologists (NAAT), Mutiu Ademola of the Senior Staff Association of Nigerian Universities (SSANU) and Adebayo Dada of the Non-Academic Staff Union (NASU).

Addressing a press conference in Ado-Ekiti yesterday, Soremekun accused Fayose of exerting pressure on him while serving as the Chief Returning Officer for the Edo State governorship election by sending one of his (Fayose’s) aides to him (Soremekun).

He claimed that Fayose had allegedly been after his life after serving as the Chief Returning Officer in Edo Governorship Election held last year September 28, where Governor Godwin Obaseki had defeated the candidate of the PDP, Osagie Ize-Iyamu.

Soremekun revealed that during the convocation week of the university held late April, Fayose who was passing through Oye-Ekiti stopped his convoy and personally participated in the destruction of the huge banner hung at the university junction in the town.

He said: “He (Fayose) ordered his convoy to stop and tore the banner of our convocation. He said it was not properly done, he alighted himself and tore it by himself before proceeding on his journey.”

“The unionists were becoming so unruly in recent time. In fact, they beat up some lecturers and we called for their arrest only for the Secretary to the State Government(SSG) to bail them out acting on governor’s directive.

Reacting through his Special Assistant on Public Communications, Lere Olayinka, Fayose said he has no business with the university.

He said: “Beyond maintaining peace and protecting the rights of all residents of Ekiti State, Governor Fayose does not have any business with Federal University, Oye Ekiti.

“The Vice Chancellor is the one that should search his conscience whether or not he is doing the right thing concerning the management of the university.”

“Be that as it may, it sounds so illogical that the head of a university will stand before the press to say that university staff members should be arrested and detained by the police for protesting.”