NDLEA Insists On Presence At Ports Despite Nigerian Govt’s Directive 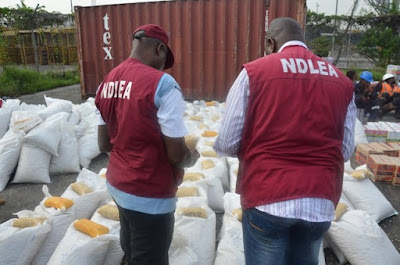 The National Drug Law Enforcement Agency (NAFDAC) has claimed its operations at the ports had been endorsed by the federal government, despite evidence to the contrary.

In a statement issued by the agency, the NDLEA said the anti-narcotics agency was among the “eight agencies” approved to operate within the ports by acting president, Yemi Osinbajo.

According to the statement, issued by Mitchell Ofoyeju, NDLEA’s spokesperson, and circulated to media houses, the agency said it received the presidential mandate to work at the ports.

“NDLEA has been cleared by the presidency to work at the seaports,” Muhammad Abdallah, a retired colonel and the chief executive of the NDLEA.

“This official position must be respected by all port agencies and stakeholders. Attempt to violate this directive shall be considered as a conspiracy to advance the nefarious activities of drug cartels to the detriment of our national security.”

“On duty staff shall be properly identified by uniform and official cards while off duty staff stay away from the ports except with the express approval of the agency head,” read the order signed by Mr. Osinbajo last week.

The implication of the order is that agencies that hitherto operated within the ports, such as the NDLEA, the Standards Organization of Nigeria (SON), and the National Agency for Food, Drug Administration and Control (NAFDAC), would no longer have access to the facility.

To reinforce its position, the NDLEA quoted the managing director of the Nigerian Ports Authority, Hadiza Bala Usman, as making a “clarification” at a stakeholders meeting in Lagos on Wednesday that “eight agencies have been mandated and approved to operate within the ports.”

“Agencies that are operating in the port apart from the approved list should be aware that they need to vacate whatever location they are currently occupying.”

Ms. Usman did meet with ports operators at the Western Ports in Apapa, Lagos, but she had listed seven agencies cleared for operation within the ports.

“I want to first recognize the seven approved agencies of government that operate in the port,” the Daily Nigerian quoted the NPA boss as saying.

“I will like to reiterate those agencies of government that are operating at the port. We have NPA as the landlord, Customs, NIMASA, DSS, Police, Nigerian Immigration Service and the Port Health.

“We have the National Drug Law Enforcement Agency, NDLEA, which is required to come in and provide their function as at when is required. This is the current position on agencies of government that operate in the port.”

When contacted, the NPA denied Ms. Usman made the statement credited to her by the NDLEA.

Ibrahim Nasiru, NPA’s spokesperson, told Premium Times yesterday that his principal couldn’t have mentioned eight agencies because they are the ones charged with enforcing the executive order.