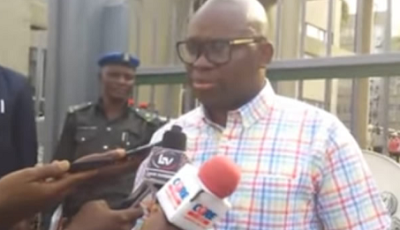 The Ekiti State Governor, Ayodele Fayose, has warned the Federal Government that the ultimatum given to the Igbo living in the North could lead to anarchy if not checked.

According to him, the trend of statements credited to some elements in the North has shown clearly that Nigeria is no longer one.

He said this while reacting to a quit notice to the Igbo in the North by the Coalition of Northern Groups, which was recently backed by some northern elders, including a former Vice-Chancellor of the Ahmadu Bello University, Zaria, Prof. Ango Abdullahi. Fayose said the unity of the nation was threatened like never before.

He blamed this on what he described as the nonchalant attitude of the President Muhammadu Buhari-led All Progressives Congress Federal Government.

Also, the President of the Ohanaeze in the South-West, Chief Nathaniel Uzomah, has said that the North stand to lose more if the Igbo obey the quit notice.

He said, “In this our Nigeria, every tribe is important and we exist for one another. Truth is that the northerners would lose more if our Igbo brothers vacate the North. This is why I want to even believe that they must be joking about that quit notice.

“We are very much important to them there. You all know that we have invested trillions of naira there. Do you think that if the Igbo are leaving the North, they would leave those property and investment behind?”

Fayose lamented that the gap among ethnic groups in Nigeria had widened beyond measure because of the body language of the Buhari administration.

“We are more divided than ever. The elements are emboldened because they believe their person is in office and nothing would happen.

“This is not surprising to some of us as the herdsmen set the tone and became notorious under the watch of Buhari.”

Meanwhile, a conglomeration of 15 churches in the 19 northern states of Nigeria and the Federal Capital Territory, on Sunday, condemned the ultimatum issued by Arewa youths for the Igbo to quit.

The organisation, under the aegis of Tarayar Ekklisiyoyin Kristi a Nigeria, called on security agencies to arrest those behind the provocative order.

A statement by the General Secretary, TEKAN, Moses Ebuga, described the ultimatum as a threat to national security.