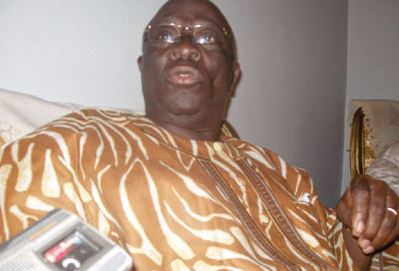 Chief Ayo Adebanjo, an elder statesman is a chieftain of the pan-Yoruba socio-political organisation, Afenifere. In this interview, Adebanjo tackles South West leaders of the All Progressives Congress, APC, who he blamed for not leading the agitation for restructuring. He also said he had warned some of them about voting for Buhari and also spoke about the ultimatum given to Igbos by some Northern youths.

How far do you think Nigeria’s 18 years of unbroken democracy has gone?

What do you think the present crop of leaders can learn from the legacy of the late sage, Chief Obafemi Awolowo, whose 30-year remembrance we are marking?

That brings me to the agitation for restructuring, what are your thoughts?

Without restructuring, there is no Nigeria, if we do not restructure now, Nigeria will break. Restructuring is not a long story; it is just that people are pretending. Restructuring means that the constitution we had at independence, which the leaders agreed to should be used, no more, no less. All other things are just looking for excuses.

Why do you think some Nigerians are against restructuring?

I said it before the elections that the northern elements are enjoying the present military constitution. The constitution that our founding fathers gave us was fair. All the inequalities in the McPherson constitution had been rectified in 1954 after our leaders went to the London Constitutional

But opposition has risen against the implementation of the report. Why?

What lessons can be learned?

The lesson is that we must go back to basics. I have been saying it. Why are the Avengers crying? All the minorities in the north too are crying. We do not want all these disabilities. Those of us clamouring for restructuring are the constitutionalists and we are the people who want Nigeria to remain in peace.

The people in government, Buhari and the APC, and all those opposed to restructuring are the people paying lip service to the unity of Nigeria because the Constitution made the president the most powerful person in the world.

If you are serious about the country being united, you will not be creating actions that separate you; you will not make appointments that will make a section of the country to be discontented.

There is no peace all over the country now because of the lopsidedness of the Buhari administration. We are under a one man dictatorship and I will proof it.

When have you heard the APC holding a National Executive Council or a National Convention? It is a serious matter. The party in government must meet to decide the policy they are going to implement.

Having said this, what are the dangers you foresee?

I foresee that the country will break; we do not need a crystal ball for that. The herdsmen have been invading all parts of the country, what has the Federal Government done? The herdsmen kill, maim and they burn but not one single arrest, they turned a blind eye. One day the people they are oppressing will react.

The court gives an order that Dasuki and others should be released, you say you are fighting corruption. He (Buhari) is just paying lip service and you swore that you are a born again democrat. Can we have democracy without the rule of law? You use the pretense of fighting corruption to do things against the rule of law. Nobody is opposed to corruption being wiped out, nobody will be happy if our resources are being stolen by a few individuals but there should not be any pretense to rule like a dictator.

The moment you rule without the rule of law, then nobody is safe, there will be anarchy. That is the licence they used to break into the houses of judges at night under the guise of fighting corruption. Is that the way to fight corruption? It is just pretense.

What do you make of the ultimatum issued by some Northern youths to the Igbo living in the North to vacate the region by October 1?

They are doing everything to irritate other ethnic groups in the country that is not from the northern region. You are saying that all ethnic groups resident in the north should leave. What does that imply? What is the implication of that? We are in a very precarious situation and it is very unfortunate.

What steps can be taken to ensure Nigeria gets back on the right track?

With the situation now, the Federal Government should summon all ethnic groups in the country and decide how to part because we cannot continue like this without people reacting. So, instead of causing violence, let us part in peace.

You belong to a club when you believe you have an advantage but when the club is oppressing you, then what is the point of remaining there other than to get out? That is why the Biafra people are saying they want to opt out, do not blame them? Ask them why they want to opt out from a country they have lived all these years? If they have been satisfied and enjoyed the unity of this country, they will not like to leave.

I say categorically, don’t let us deceive ourselves, Buhari and the APC are not serious about keeping the country together, they are only paying lip service. If that statement is not correct, there is a lot the president should do to show that he welcomes everybody.

All they are saying to us is that if they are going to remain in the country, it must be on the terms favourably to the northern region, that is the only condition and they are building it. I don’t believe those who made that statement did not have the backing of their people.

For all the youths in the north to call for a press conference and say that a section of the country should leave their area when they know they are also in other areas; they are only calling for war. They believe because their people dominate the security forces in the country, they believe they are ready for a fight. It shows they only want to dominate the rest of the country. I say this, with all the statements emerging from the north, there is no reaction from the Federal government.

What does it show? It shows the other parts of the country can go to blazes because they are in power. With all the complaints we have been having, the president has not gone on air to condemn all these actions. Not even a single arrest has been made.

Some of those now in the APC government were in the forefront of the June 12 struggle. Is this what we bargained for?

This is a one-man rule. Members of the APC, who are democrats, are conniving and colluding with this autocratic regime. People like Tinubu and other South West leaders, who are in the APC, should talk now. This is not what we bargained for. Is that the change we want? Is this what you led the South-West to do? They have sold out and I am sure the electorates in the South West and South-south, who were led into the APC, are not dunces.

The South-West played a prominent role in a return to democratic rule, what are leaders like you doing…

(Cuts in) What can we do? The solution to the country is to go back to federalism.

Which was what was fought for during the June 12 crisis?

Not only that. There should also be a return to the constitution which all the leaders in London agreed to before independence. The constitution we are talking about was canceled by the army, dominated by the north. There can be no peace. I warned some leaders from the South-West that Buhari’s second coming is the greatest mistake you will make if you vote for him.