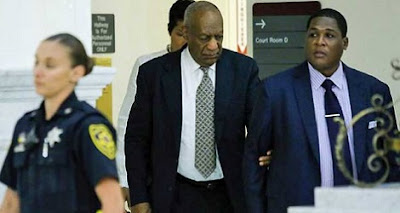 The US jury tasked with finding Bill Cosby guilty or innocent of committing sexual assault announced on Thursday (Jun 15) that they were deadlocked, as frustrations mounted among alleged victims.

The 79-year-old pioneering black actor could face the rest of his life in prison if convicted on three counts of aggravated indecent assault for allegedly drugging and molesting a woman at his Philadelphia home in January 2004.

The 12-member jury, who were selected 480 kilometres away from the trial in Norristown, Pennsylvania, have now been sequestered for 10 days in one of the biggest US celebrity trials in years.

On Thursday, they informed the court after nearly 30 hours of deliberations that they were deadlocked on reaching a unanimous decision.

Judge Steve O'Neill however instructed them to return to their chamber to continue deliberations.

If the seven-man, five-woman panel ultimately remains unable to reach a verdict, O'Neill will be forced to declare a hung jury, leaving the prosecution with the option of requesting a re-trial.

Around 60 women have publicly accused the legendary entertainer of being a serial sexual predator in remarkably similar accusations that span four decades, ending his career and pulverising his reputation.

This trial concerns the allegations of just one woman - Andrea Constand - as under US law, most of the alleged abuse happened too long ago to prosecute.

Several of Cosby's accusers were on tenterhooks today in the corridors of the Montgomery County Court House, anxiously awaiting a verdict.