Jibrin Was RIGHT, He Was Never Suspended! Read APC’s Statement 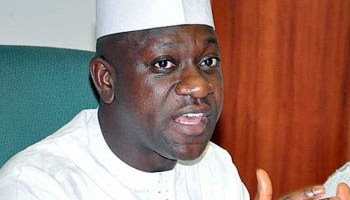 The Kano State chapter of the All Progressives Congress (APC) has distanced itself from the purported expulsion of a suspended member of the House of Representatives, Abdulmumin Jibrin, from the party. The party, in a statement issued by its Public Relations Office, Bashir Yahaya Karaye, described the expulsion as a mischief carried out by a party official that breached all protocols. Imagine. The Statement...

“We have received with absolute disappointment rumour of expulsion of Hon. Abdulmumin Jibrin Kofa, a strong pillar of our party, the APC in Kano and Nigeria as a whole. The unfounded report was said to have originated from a member of the party who clearly abused the party’s protocols in disseminating that wrong information to the public.

“The party wishes to state that neither the leader of the party in Kano, His Excellency, the executive Governor of Kano, Dr. Abdullahi Umar Ganduje nor the state chairman and state executive committee were consulted or endorsed such mischievous act. Continue....

“The party is appealing to the public to disregard that mischief as it sets out to penalize all the members involved in this dispiriting embarrassment and unnecessary confusion among members and in the media.

“APC does not and will never tolerate impersonation, abuse of office and wanton vindictiveness by a member who had no authority to make such grave pronouncement, especially at the time we are building a united force to deliver on our promises for the people of Nigeria.

“We wish to emphasize that Hon. Jibrin is an essential member of the APC, and his contributions and representations of our interests have never gone unrecognized. We reiterate this as a show of our appreciation of his membership and loyalty to the party at both local and national level.”