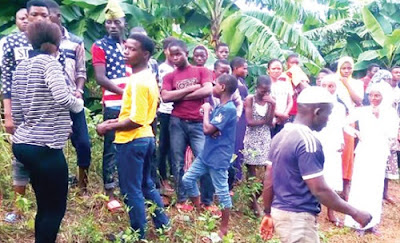 The corpse of a construction worker has been found dangling from a rope tied to a mango tree at Isoto, Ajasa Command, in the Alimosho area of Lagos State.

The victim,  identified as Water,  was said to be among those working on the construction of the Command-AIT Road. The corpse was said to have been found opposite the Alade Stadium end of the road.

The deceased was reportedly sacked recently, which residents claimed could be the reason for the suicide.

Punch Metro learnt that the corpse was spotted around 2pm on Sunday by a resident, who raised the alarm. People in the community were said to have raced to the spot where the body was found.

A member of the landlords’ association in the area reportedly contacted policemen from the Meiran division.

A resident and witness, who spoke with our correspondent around 6pm, said although the police had arrived at the scene, the corpse was still dangling from the tree.

He said, “There is scanty information about the man. He was found by someone in this area around 2pm and the person raised the alarm.

“A crowd of people have been milling around the corpse since then. He put on a yellow polo shirt with the name, Lagos State Public Works Corporation, written at the back. The agency’s logo is also on the shirt. The action appeared deliberate. The man was among the workers employed by a private construction company to work on the Command-AIT Road. He was on daily pay, but was recently sacked. That may be the reason for the suicide.”

The resident told our correspondent that the victim couldn’t have been killed by anyone because of a building close to the scene of the incident.

“If he was taken there by some persons, he would have screamed and people would have come to his rescue. Also, there is no sign of injuries on him to suggest that he was beaten to death before being hanged,” he added.

Punch Metro learnt that some tenants in a house close to the scene had been invited by the police to make statements.

The resident later said officials of the State Environmental Health Monitoring Unit had arrived at the scene to remove the corpse.

“Three workers with SEHMU have just removed the body. They also took away his bag, which was at the foot of the tree,” he added.

The state Police Public Relations Officer, Olarinde Famous-Cole, confirmed the incident, noting that the corpse had been deposited in the Lagos Mainland Hospital mortuary for autopsy.

“The case has been transferred to the Divisional Crime Branch for further investigation,” he added.