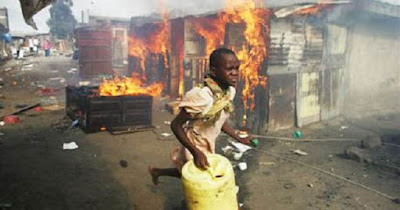 About two people have been feared killed with places of worship burnt as Hausa traders and some youths, believed to be local government task force team in Eleme Local Government Area of Rivers State, clashed.

Vanguard gathered that trouble started when some youths from Eleme, who are operating as a task force, went to Opaku Park in Onne to demand a payment of taxes from Hausa traders doing business in the area.

An eyewitness, Mr. Franklin Bobmanuel, narrated that the youths became angry when the traders declined paying the tax and the ensuing argument resulted in a free-for-all.

Bobmanuel said one of the tax officials died during the fight and his colleagues, on noticing that one of them had died, killed one of the traders in retaliation.

Vanguard also learned that a church and a mosque in the area were burnt down. Meanwhile, the Public Relations Officer of the state’s Police Command, DSP Nnamdi Omoni, confirmed that the two groups clashed in Eleme and that the incident led to burning of a Church and a Mosque.

Omoni said: “We are aware of the incident, but I am yet to get details of what happened. We have swung into action and our men have been deployed to the area to maintain calm. “We are investigating the matter; we will make the report available as soon as we are through.”