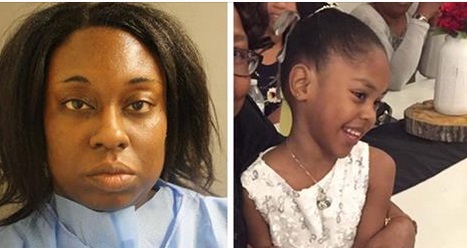 Capital murder charges were filed against a mother in Harris County, Texas, on Monday for the stabbing of her 4-year-old daughter, said the Harris County Sheriff’s Office.

Laquita Lewis, 34, allegedly stabbed her child, Fredricka Allen, multiple times in the chest and left her body on the floor of their home.

Lewis’s family members said she texted several of them and confessed to hurting her daughter. After the family members dialed 911, deputies were dispatched to the Timberwalk Apartment Homes.

Fredricka was found in the home around 9 p.m. by deputies who believe she was stabbed to death earlier in the day. According to investigators, Lewis engaged in a fight with her boyfriend before the stabbing.

“We don’t really know what the catalyst of that argument was,” Thomas Gilliland, spokesman for the Harris County Sheriff’s Office said. “Obviously it was some sort of, enough to escalate to where she killed the 4-year old."

The mother was then involved in a car accident, which resulted in her being rushed to a hospital around 6 p.m. While at the hospital, Lewis texted family members and apologized for harming her daughter

Lewis is now in custody and has been charged with capital murder.