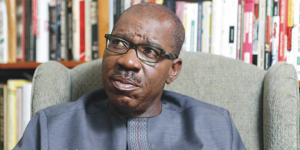 Governor Godwin Obaseki of Edo State has advised against placing advertisements across various media platforms to celebrate his 58th birthday on July 1st this year, urging friends and well-wishers, who may want to do so to donate the expenses to WeCare Trust.

In a statement endorsed by Chief Press Secretary to the governor, Mr. John Mayaki, it was revealed that Governor Obaseki was unhappy with the rate of helpless children in the state and he had been making moves to curb the spread and rectify the social damage.

The statement read, “Governor Obaseki has been worried and taking steps to end the societal stigma of helpless children living of the streets and witnessing the worst parts of life before they have even had a chance to live. He will not rest until he has addressed this satisfactorily.

“He has met with religious leaders and has tried to upswing education in the state, he has also decided that funds that should have been directed to advertising felicitations for his birthday be donated to charity and orphanages in the state.”

The Governor’s Chief Press Secretary also stressed that it may dishearten the governor to see celebration advertisements instead of notifications that funds had been donated to the charity organisation, calling on well-meaning Nigerians, who would not have been able to afford advertisements, to also donate to charity foundations in the state.

In particular reference, the statement recalled that WeCare Trust is a charity foundation owned by Iara Oshiomhole, wife of Former Edo State Governor, Adams Oshiomhole, adding that it is the same foundation for which Governor Obaseki ran the 10km Okpekpe Road Race.