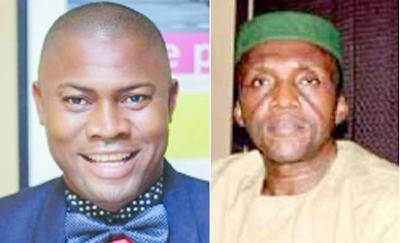 I have passed through the valley of death”.Those were the words, depicting a high sense of lamentation,from Emeka Egbulugha, 33, the pharmacist working with Maydon Pharmaceutical Company in Ilupeju, Lagos, whose boss, Chief Donatus Dunu, was abducted and kept in captivity for over 90 days, at the Igando area of the state.

Chukwudubem Onwuamadike, a.k.a Evans, regained his freedom miraculously. Although, even after he had paid a ransom of N150m, Evans and his boys did not allow Dunu go. He reportedly escaped just few hours to the time slated by his abductors to kill him.

After his escape, Chief Dunu gave a vivid account of his sordid experiences while in captivity, to the police. Shockingly, he named some of his staff, allegedly led by Emeka, as the mastermind of the kidnap.

The suspects were subsequently rounded up and detained by the anti-kidnap unit of the police. Incidentally, just few days after the kingpin of the dreaded kidnap gang was arrested, Emeka and two other staff of the company, were brought before the gang for identification. Surprisingly, both Evans and other members of his gang denied knowing Emeka or any staff of the pharmaceutical company. This led to their being granted bail by the court pending when police will conclude their investigations. The search for Emeka and his colleagues was not an easy one; but it became rewarding as he opened up after an accidental encounter. Excerpts;

“My name is Emeka Godson Egbulugha. I graduated from the University of Nigeria, Nsukka, Enugu State, Nigeria. I am a Pharmacist by profession. I got employed by Maydon Pharmaceuticals Limited in 2013, as a Medical Representative. In 2014, Chief Donatus Dunu, the Chief Executive Officer of Company accused his then Superintendent Pharmacist of embezzlement of fund. The Pharmacist later filed a suit against Chief Dunu and the Company in court which is still pending. Following my performance in the same year, he promoted me to the post of a Superintendent Pharmacist. In the course of work,

I combined the job of a Superintendent Pharmacist with that of a Medical Representative in order to please him. “On February 14, 2017, our CEO, Chief Dunu was kidnapped and the senior staff heard of it on February 15, 2017. At that point, we all started fasting and praying for him to be released and I personally went to Church to pray for him and the church at large also prayed for his release. To my greatest surprise, on May 12, 2017, I was at the University of Lagos for a supply when Mr. Gbenga (The Human Resources Manager) of Maydon Pharmaceutical called me and asked where I was, I told him that I was at Unilag Pharmacy. He asked me if I was coming to the office immediately and I told him that I needed to go to Ikeja (Mother & Child Hospital) for another supply before returning to the office.

“When I finished the supply, I rushed back to my office and within a few minutes, some policemen and women came into my office and asked me if I was Emeka, I said yes. They asked me what my duty was in the company and I told them that I am the Superintendent Pharmacist; they said yes, that I was the one they were looking for.

They handcuffed and took me to Ilupeju Police Station where I was beaten up and accused of kidnapping my boss. They told me that while my boss was in captivity, he heard my voice calling the person in charge of warehouse to load goods worth N7million Naira. Within the space of 45 minutes, the staff in charge of Warehouse were brought inside the cell at Ilupeju Police Station, and later, they took us to Anti-kidnapping & Anti-Cultism Office at Surulere, Lagos. “On May 13, 2017, the policemen started their investigation. They took me and the staff in-charge of Warehouse in handcuffs to our houses for a search. At my house, they took my mobile phone sim cards, laptop and cheque books for further investigation. Three weeks after our detention, the policemen went to the warehouse with the person in charge of the warehouse in company of Chief Dunu’s elder brother, Mr. Anslem Dunu, the Chief Accountant, the Director of Business and Development and Assistant Warehouse keeper, and they found out that his claim of looting his warehouse was not true. His goods were intact. Some goods were even surplus.

“After the stocktaking, Chief Dunu told the police that he had additional statement to make. It was at this time, that Chief Dunu claimed he saw me in the place where he was kept in captivity by the kidnappers. Whilst in detention, the warehouse keeper and I prayed and fasted daily for Almighty God to vindicate us from this false accusation and character assassination.

“On May 19, 2017, the Policemen took us to Yaba Magistrate Court to obtain a detention order from the court pending for further investigation. The court asked them to return on June 6, 2017, to inform the court of the status of their investigation. On that date, the police asked for three additional weeks to detain us but our lawyers opposed the application and applied for our bail. The court adjourned to June 16, 2017 for ruling on our bail application.

“To the glory of God, on June 10, 2017, the police apprehended Evans and his gang members and paraded them to the public on Sunday, June 11, 2017, at the Police Command, Ikeja. On Wednesday, June 14, 2017, the three of us detained at Anti-Kidnapping, Surulere, for conspiring with Evans and his gang to kidnap Chief Dunu, were taken to the Police Command, Ikeja (SARS office), before Evans and members of his gang for an identification parade. In our presence, the policemen asked Evans and his cohorts if they know any of us. They all said that they have never seen us before. In a bid to nail me in particular, they asked Evans to point at the pharmacist that gave him the information about Chief Donatus Dunu and he said, none of us gave him information, that he had not seen any of us before.

The Police asked Evans’ second in command in-charge of where they kept Chief Donatus Dunu to point at the pharmacist that do come there to make calls, and he said that he has not seen any of us before. The police officer told him that one of us said that we know him and he said, if any of knows him, he should talk and tell him where the person knew him from and where. “After this face-to-face identification, we were asked to go and were taken back to detention at Surulere. On June 16, 2017, we went back to court and our lawyers informed the court about what happened after the hearing of June 6, 2017, but the lawyer who represented the police prosecutor could not confirm if, indeed, we were paraded before Evans and his gang members. The court then adjourned the matter to June 20, 2017. On that date, the court, after listening to the Police lawyer and our lawyers, granted us police bail, pending conclusion of police investigation. ’This was after 40 days of detention.

“I must state that I am still in shock as to how Chief Dunu decided to level such weighty allegations against me. Since I joined his company until the date of his kidnap, I have never had any issues with him. I have never had any case against anybody even throughout my University days, let alone kidnapping my boss,” he concluded. The police are still continuing their investigations in this unfolding Evans saga.