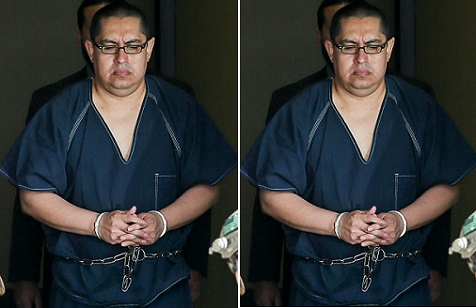 A Mexican cartel leader who dismembered a six-year-old girl with an axe then burned her limbs as he made her parents watch has been sentenced to multiple life sentences in an American prison.

Marciano Millan Vasquez, 34, was jailed for his involvement in the deaths of 29 people which he carried out for Zetas, a drug gang which operates in northern Mexico, between 2009 and 2015.

Among them was the six-year-old girl who he butchered on the patio of her home in front of her parents to ensure they would 'remember' him.

The killings were all carried out in Mexico but because Millan was working living in San Antonio, Texas, and was arrested there, he was prosecuted in US court and will serve his sentence there.

A 39-year-old witness told of the girl's sickening death, which he said he was forced to watch after being held responsible for a missing shipment of marijuana.

The witness, a convicted trafficker who was not named for his own protection, told the court he was forced to witness 18 killings in a single night as punishment for losing the drugs, and as a warning to cover the loss, My San Antonio reports.

At one property was a husband, wife and little girl tied up and blindfolded on the patio, he recalled, with a fire burning in a barrel nearby.

He was forced to kneel and the group had their blindfolds removed so they could watch as Millan dismembered the child while she was still alive.

Through tears, the man described the girl's screams as her arm and leg were cut off before being burned in the flaming barrel.

Laughing, Millan told the watching parents: '[This is] so you’ll remember me.'