Friends Say Rihanna Is So In Love With New Flame, As Her Dad Speaks 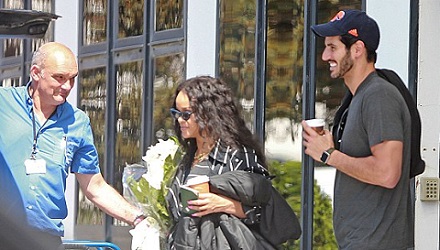 And it isn't difficult to see why Rihanna is completely smitten with the handsome Saudi heir, as it's revealed he 'flew a life-size bear half way around the world in an otherwise empty jet' to impress her.

The billionaire - whose family own the rights to the distribution of Toyota vehicles in Saudi Arabia - wooed the singer, 29, in the early stages of their relationship with the 'seriously big romantic gesture'.

And the cuddly gift seemed to have worked, as Rihanna was spotted putting on a very hot and heavy display with Hassan while on holiday in Spain this week.

Speaking about the grand gesture, a source told The Sun: 'It sounds outrageous, but these guys are obviously in a different world to the rest of us - although even by their standards with was a seriously big romantic gesture.

Rihanna, who briefly dated rapper Drake in 2016, is so serious about her handsome new man, that she told her family about him about a month ago.

However, her dad Ronald Fenty proved to be a little surprised by the union, stating: 'I didn't know he was a billionaire. Too little money, or too much money can't make you happy, you need to something in-between.'

Like another other doting dad, Ronald has also warned Hassan of his daughter's independent nature and refusal to be told what to do.

He explained: 'He's going to have to buckle up, she's a hard-working girl, she's very independent and ambitious. Nobody can tell her what to do. 'She doesn't want to be lifted up, she wants to get up there herself.'