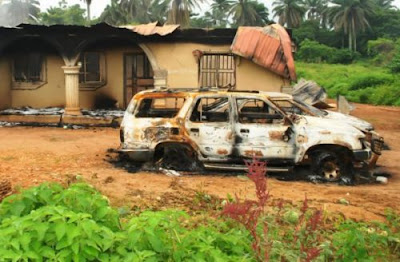 Two persons were killed and properties worth millions of Naira were destroyed last Thursday when two communities, Iloffa and Odo-Owa communities in Oke-Ero Local Government Area of Kwara state clashed over new yam festival in a market.

Though relative calm has returned to the two neighbouring communities, many shops and stalls remained under lock.

The crisis, which erupted from a market bordering the communities resulted in the killing of two persons and destruction of properties.

The crisis was said to have escalated due to disagreements among the community leaders over the introduction of the traditional new yam festival in the said market.

Meanwhile, the state government had imposed curfew on the two warring communities as part of measures to curtail the crisis.

Alhaji Isiaka Gold, the Secretary to the State Government, announced the curfew

in a statement after an on-the-spot assessment of damages in the communities.

He announced a 6 p.m. to 6 a.m. curfew with immediate effect.

Gold stated that with the curfew, all human and vehicular movement in the two affected communities had been barred.

According to him, the state government is also ordering the suspension of any activities relating to the yam festival in Oke Ero Local Government Area of the state.

A correspondent of the News Agency of Nigeria (NAN) who monitored the situation on Sunday reports that many houses and shops remained under lock.

A combined team of police and army were seen patrolling the metropolis to forestall any breakdown of law and order.

Gold added that the curfew was to assist security agencies to contain and prevent the escalation of the conflict, as well as restore peace.

He reaffirmed government’s determination toward ensuring adequate security for citizens and urged residents of both communities to remain calm and continue to conduct their lawful affairs in peace.

He, however, warned that the full weight of the law would bear on any individual or group found to have initiated, participated or otherwise contributed to the violent conflict between the neighbouring communities.

Government had resolved to institute a judicial commission of inquiry to unravel the immediate cause and perpetrators of the act, he added.