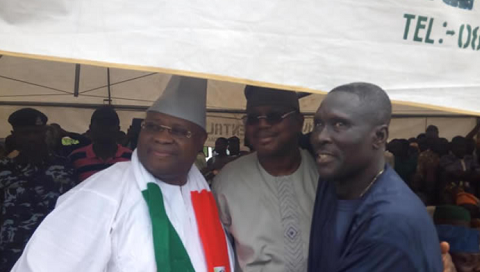 The candidate of the All Progressives Congress in the oncoming Osun-West senatorial district by-election, Senator Mushadiru Hussain, has described the Peoples Democratic Party candidate, Chief Ademola Adeleke, as a comedian, whom he said would not make a good senator.

Speaking on Sunday, Hussain said Adeleke was a good dancer but a political neophyte, who did not have the needed political experience to perform legislative duties.

He also described as inconsequential the coming together of the hitherto warring factions of the PDP, saying their alliance could not stop him from winning the election because Osun-West voters were in his support.

He said, “They were thrown out of power while they were together and apparently solid. So, is it now that they came together based on their deception and pathological hatred for (Governor Rauf) Aregbesola that they can win election?

“I sympathise with them because those who are pushing them benefitted largely from Aregbesola’s benevolence and industry, and the only way to repay him is to work for his fall. Unfortunately, Aregbesola has not lost his political steam with the people on the street, except for a very few elites who wanted to share Osun’s collective resources but were denied.

“The puppet and the puppeteers on the other side knew it was a failed mission, but there is no crime in trying. I encourage them to continue with their razzmatazz; our people will decide who they prefer on July 8 between a progressive candidate and a reactionary.

“Do you know who is shivering? It is the candidate that is so desperate and hopping from one party to another and even went to bed with those who beat his brother to a pulp and kicked him out of their party. The person who chickened out of a primary and shopped for an uncontested ticket is the one that is shivering. The one that has already conceded defeat by alleging, without proof, that the election will be rigged against him is, indeed, badly shaken.”

However, the Secretary, Adeleke Support Group, Lukman Afolabi, when contacted by a Punch correspondent said Hussain resorted to blackmail because he did not have anything good to tell the people.

He said, “There is nothing wrong with Otunba Ademola Adeleke dancing whenever he is happy. He is a shrewd businessman and a competent politician, who cannot be rubbished by Hussain, who did nothing while representing the senatorial district at the Senate.

“Ogbeni Aregbesola also dances at campaigns, at public functions and he sings Fuji music. So, is Hussain also abusing his leader, the governor?

“They are looking for anything to use against Adeleke because they know they are a failure and that the people have turned their backs against their party. I am the immediate past secretary of the Ede-South Local Government Council, I worked under Aregbesola and I know that the people of the state have turned their backs against the APC and its candidate.”