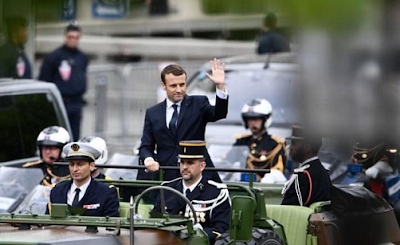 A French "nationalist" has been arrested and charged over an alleged plan to kill President Emmanuel Macron on Bastille Day when he is due to oversee a military parade with US counterpart Donald Trump.

The unemployed 23-year old from the Paris suburb of Argenteui was seized after expressing an interest in acquiring a real machine gun in a video game chatroom.

He also threatened police with a kitchen knife during the arrest. Officers also found three knives in his car.

His computer contained a search history of potential targets, it has been reported.

The Paris prosecutor's office described him as "psychologically unstable but conscious (of his actions) and determined".

The arrest took place on Thursday and the man was charged on Saturday for individual terrorist activity and remanded in custody,  The prosecutor's office said that the suspect's plans were vague and not yet finalised, and that he appeared to be acting alone.

He did, however, tell police of a possible plan to attack Macron on July 14, when the French president traditionally attends the annual military Bastille Day military parade on the Champs-Elyées, and expressed "nationalist" views.

The suspect was convicted last year to three years in prison, with 18 months suspended, for "provoking racial hatred and supporting terrorism" after expressing admiration for Anders Behring Brevik, the Norwegian far-Right terrorist who murdered killed eight people in a bomb attack and shot dead another 69 Workers Youth League members at a summer camp in July 2011.