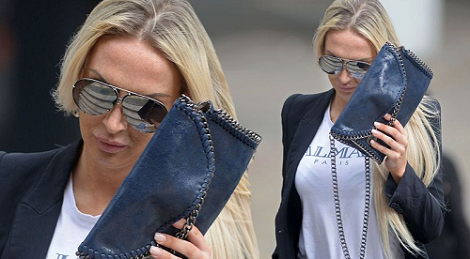 Reality TV star and benefit cheat Chelsey Harwood has been jailed today after refusing to use public transport to carry out community service because she didn't want to mix with "scallies".

She was ordered to carry out 100 hours unpaid work, given a four month suspended prison sentence and a tag in April after her media bragging about her earnings led to her being uncovered as a £25,000 benefits cheat.

Chelsey has been sent to a nearby woman's prision.

She was consequently summonsed back to court and during the proceedings today she repeatedly interjected from the dock and said she would rather go to jail.

Judge Andrew Menary said that the probation service had “bent over backwards” to accommodate her but it was plain that without “catering for her every whim” she would not complete the order.

Former web cam girl Harwood told the Liverpool Echo last month that the probation office was 25 miles from her home and she refused to get the bus as she did not want to mix with “scallies.”

Ben Jones, prosecuting, told the court that there had been “no effective engagement” from her with the community requirements.

Defence lawyer John Rowan, said, “She wants me to advance on her behalf from the outset that this is not a flagrant disregard of the order from her point of view.”

He said that she had attended her local probation office in St Helens and while in reception there was a man, whom she did not know, who left a message on social media making several threats towards her.

“I have seen these messages, provided to me this morning, they are on her iPad. I have read them they are serious threats to harm her. “

He said they related to the fraud and her gender. Asked by the judge if she had told the police Mr Rowan said she had not.

Harwood, who was wearing a black jacket, white top and jeans, then shouted out from the dock, “Am I allowed to answer any of these questions? This is ridiculous, it’s not fair.

“He threatened to burn my house down, yes I took them seriously. No I didn’t go to the police because I would be in more danger.”

The judge responded, “Everybody knows this defendant courts publicity. Far from keeping allow profile, at every stage of this process she has posted on line regular bulletins on what she has expected to happen, what did happen and various posts since then.

"The court to have regard to on line activity when all of this has been encouraged by her.”

Harwood shouted, “No it isn’t. So I should be threatened just for living my life and posting it on social media?

Mr Rowan said that Harwood, who admitted breaching the court order, is fearful of attending for unpaid work, attending the office and putting herself at risk of harm.

Judge Menary said, “The probation service has bent over backwards to accommodate her and she had been offered the chance to complete the programme on Wirral. Why didn’t turn up?”

Mr Rowan said that “she is anxious in relation to public transport” but the judge pointed out that she said she had access to a car and could drive but Mr Rowan said that unfortunately was no longer the case as she was nervous following a traffic accident a few months previously.

“The only way she could get there was public transport and she felt mentally unable to do so.” The judge queried this and Mr Rowan confirmed that that was the situation.

“While she would like to be able to complete the order she doesn’t feel at this time that she is able to.”

Judge Menary said that he had told her at the time when the sentence was imposed that it was a direct alternative to immediate imprisonment and failing to complete the requirements could lead to her going to prison.

"You are perfectly entitled to do, some sort of online personna and managed to cultivate a social media celebrity status.

"There is nothing particularly edifying or positive about the image you have created for yourself.

“Following your sentence you deliberately posted or encouraged the posting of images celebrating the type of sentence you received. If that was an attempt to ridicule the sentence or the court it failed and none of that is of any concern to me today.

“My only concerns were that you completed the requirements properly and on time ….you have completely failed.”

He said that probation officers had “bent over backwards to try and accommodate your particular special requirements” and arrangements had been made for her to attend the Wirral office as she feared threats or abuse when attending her local office.

“ I accept you have been the subject of on line threats. These were no doubt triggered by your own continuing on line activity which has continued unabated including posting details of this breach proceedings.

"This makes it plain to me that you have no intention of completing the requirements at all, certainly without a great deal of extensive and extra resources being expended by probation services catering for your every whim.”

He said he was going to activate the suspended jail term but only in part as she had completed the eight week curfew he had imposed. He revoked the rest of the original order.

When he sentenced her initially in April he described 29-year-old transgender Harwood of living in a “fantasy world” with an unhealthy celebrity life style.

Harwood, of Merseyside, had pleaded guilty to three benefit fraud offences involving a total of £25,156 between April 2013 and January last year.